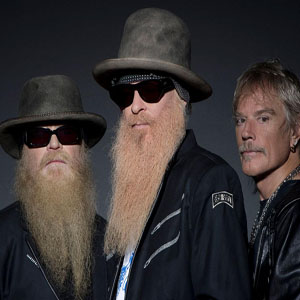 ZZ Top[a] is an American rock band formed in 1969 in Houston, Texas. The group consists of founder Billy Gibbons (vocals, guitar), Dusty Hill (vocals, bass), and Frank Beard (drums). Initially rooted in blues, the band’s style has evolved throughout their career, with a signature sound based on Gibbons’ blues guitar style and the rhythm section of Hill and Beard. Their lyrics, often embellished with sexual innuendo, focus on their Texas roots and sense of humor. Popular for their live performances and the identical physical appearances of Gibbons and Hill—who are rarely seen without their long beards, sunglasses, and Stetson[citation needed] hats—the group has staged several elaborate tours.