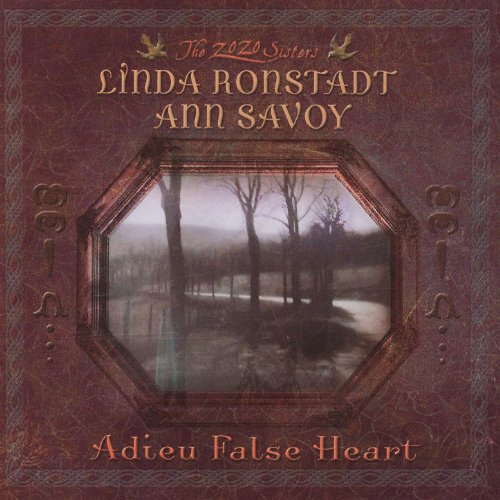 Few artists in popular music have roamed as restlessly as Linda Ronstadt. Since the mid-’80s, when she broke away from her sure-fire SoCal pop/rock formula long enough to team with the legendary arranger Nelson Riddle for a trio of pop standards albums, Ronstadt has continued to diversify: a couple of Spanish-language albums here, a kids’ set there, a Christmas album, an outing with Dolly Parton and Emmylou Harris. Adieu False Heart is yet another detour down a side road for Ronstadt: a full-fledged collaboration with Ann Savoy, a mainstay of the Savoy-Doucet Cajun Band, one of the most respected bands within that genre. Ronstadt and Savoy first worked together on the 2002 compilation album Evangeline Made: A Tribute to Cajun Music, and Adieu False Heart is, in its own way, a tribute as well. Although its soul resides squarely in Cajun country, it’s not as purist a Cajun recording as those Savoy makes with Savoy-Doucet, a band that also includes her husband, accordionist Marc Savoy, and the ace fiddler Michael Doucet. Yet it’s as different from Ronstadt’s radio hits as the Riddle and mariachi recordings were, and rendered as honestly and confidently: Ronstadt clearly enjoys visiting Savoy’s musical territory and honoring this particular pocket of Americana. The pair, switching off on lead vocals and/or harmonizing tightly, take two from the British songsmith Richard Thompson, “Burns’ Supper” and “King of Bohemia,” alongside largely languid material from Bill Monroe, Julie Miller, and others. But the big ear-opener of the album is the duo’s cover of “Walk Away Renee,” the Left Banke’s 1966 Top Five hit, here recast as an acoustic weeper. That Ronstadt would give the song such a heartfelt reading does not surprise — it’s a natural for her songbook. That she and Savoy so effortlessly transform it into a Cajun-style ballad does. With top pickers like mandolinist Sam Bush and bassist Byron House onboard, and the two versatile vocalists clearly enjoying their moment together, Adieu False Heart captures the Cajun flavor naturally, without pretending to be something it’s not.