Posted by Green on February 27, 2019
in british folk
as West of Eden 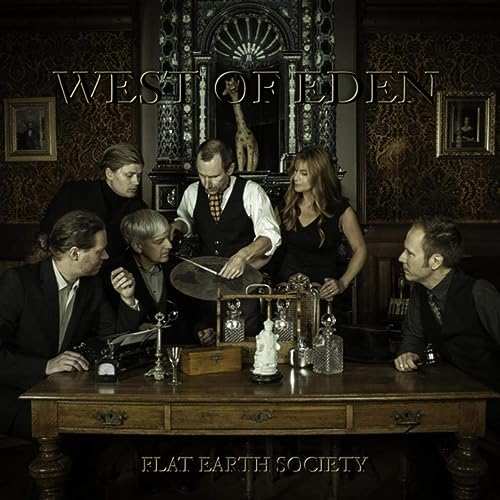 It’s a touch ironic that one of the best bands currently energising traditional British and Celtic folk music with a contemporary lens happens to come from Sweden. Comprising Lars Broman on fiddle, Martin Holmlund on bass, drummer Ola Karlevo, Henning Sernhede on lap steel and electric guitar and fronted by Jenny and Martin Schaub, the former on accordion and the latter playing assorted guitars, piano, cittern and mandolin, they’ve been playing music since 2005 and this is their eighth album (two of them being Celtic Christmas collections), recorded predominantly in Scotland (in anything from churches to distilleries) and featuring contributions from such folk luminaries as Damien O’Kane, John McCusker and Heidi Talbot.

Unlike some of their past albums, this doesn’t have a conceptual basis, other than generally being about partings and new beginnings, opening with the moody, rumbling percussion, acoustic title track, Jarlath Henderson on low whistle and Jenny, her airily pure vocals at times evocative of Anne Briggs, taking lead on a song about a broken romance in which the narrator’s world has been left flat.

Kicking up their folk rock heels, as the title suggests ‘The Dwindling Of The Day’ concerns the passing of time, Jenny singing about holding on to memories of someone who’s no longer around, slowing down slightly for ‘Horsehoofs & Primroses’, O’Kane on tenor guitar, a traditional-flavoured number of the urge to go a roaming when Spring is in the air.

Henderson contributing harmonies, set to puttering percussion, ‘Pretty Please’ is a liltingly lovely song about being weary of domestic squabbles and “rocking our boat on the wildest of seas”, giving way to ‘Kate, Are You Ready Now?’ as, Henderson on Uillean pipes and Karlevo laying down a slow march beat, Martin makes his first lead vocal appearance on a stirring strummed ballad that puts a spin on the jilted at the alter tale, this time it being the bride who doesn’t turn up while the groom tries to convince himself she’s just running late. Jenny returns for the jazzy ‘Porcelain Days’, hints of Pentangle colouring its lyric about navigating your way through a fragile relationship walking on eggshells and hoping the other partner will stick around as the ice starts to crack.

The first of two instrumentals, ‘Isak/Doris’ combines two fiddle tunes, Duncan Chisholm on the first with its military snare beat before McCusker takes over on the sprightlier second half. Then, it’s on to ‘Old Miss Partridge’, O’Kane on banjo and Jenny duetting with Talbot on a jaunty, accordion-led romp about an eccentric old bird suspected of being a witch and being found dead, blasted by lightning near a tree on the hill, her ghost still wandering at night.

It’s back to melancholia with McCusker providing low whistle for as Jenny sings the simply strummed, strings laden lament ‘Come Winter, He’ll Be Gone’, another song about loss and partings with the changing seasons serving to metaphorically chart the course of the relationship on the album’s most poetic lyric, evocative at times of Christina Rosetti.

Putting on his best Irish accent, the fiddle-accompanied, trotting rhythm ‘Vipers & Fireflies’ is Martin’s only other lead vocal, another song about how our worst nature sometimes gets the better of us and we say things in the heat of the moment we later regret, here using weather imagery as a metaphor.

The final song has Jenny accompanied by McCusker on tin whistle for ‘Peacock Blues’, its lively Irish jig-like tune belying a lyric that returns to a theme of arguments with the narrator being in the shadow of a more dominant personality (“I am the ceiling and you are the sky…you light up the room and I’m in the gloom”), the album ending on the other instrumental, ‘Rowbotham’s Map’, arranged for accordion and fiddle, bringing things full circle with the title referring to the Flat Earth Map of the World drawn up by the artist Samuel Rowbotham around 1873. Flat or round, global recognition for West of Eden among folk circles is long overdue.