Posted by Green on March 31, 2020
in blues, country
as Watermelon Slim 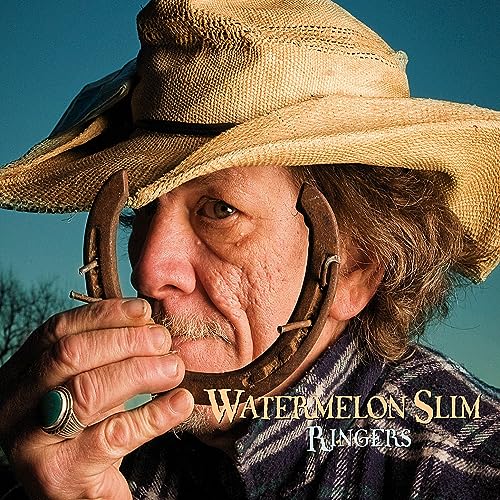 Bluesman Watermelon Slim comes honestly to his stage name. Over the years, he’s had many odd jobs including truck driver and forklift operator, but just before becoming a touring musician, he was a watermelon farmer in Oklahoma. As has been noted, despite his working-class persona, Slim is a well-educated man with degrees in journalism and history, and is smart enough to be a card-carrying member of Mensa, the high IQ society. After a near-fatal heart attack in 2002, Slim got serious about his music. He’s been a relentless road warrior ever since, and released six splendid albums of country-blues — both acoustic and electric. On the cover of Ringers, Watermelon Slim’s eyes are twinkling and he sports a contented grin, a change from his usual dour grimace. That sly smile is echoed in the music on the album, which is more country than ever before, but it’s old-fashion honky tonk country, not Nashville product. The pickers on Ringers may be Nashville session heavies, but like Slim, they play outside the box on this outing. Case in point, “Please Take This Cup,” a song about a man’s struggle with the bottle that’s based on Luke 22:42 “Father please take this cup.” In lesser hands, this conceit might be sacrilegious, but Slim’s twist on the lyric makes it a powerful prayer for sobriety. It’s a stunning tune. On a lighter note, there’s “I Appreciate That,” a honky tonk celebration of true love with bluesy pedal steel by Paul Franklin, and “Good Old Boys Never Change,” a bouncy barroom rocker that tips it hat to guys who love “eatin’ pies and tellin’ lies.” He revisits the protest tunes of his youth with the country boogie of “End of the Line,” which laments the death of our nation’s railroads at the hands of big oil, and “If There Is Any Heaven,” a gospel-flavored cry of grief that takes a dark look at the world we live in while managing to find a glimmer of hope and light. The conversational lyric doesn’t exactly rhyme, but that makes the message even more effective. Slim also covers a few classics, reinventing them in his own inimitable style. The Conway Twitty hit “Tight Fittin’ Jeans” gets a bluesy makeover with an arch vocal that makes the story of a rich woman finding her inner cowgirl in a country bar sound brand new. The Moe Bandy classic “Soft Lights and Hard Country Music” has a hint of Haggard’s Bakersfield swing, while Jimmy Buffet’s “He Went to Paris” is given a melancholy reading that features Slim’s expressive slide guitar and a sensitive, understated vocal.