Posted by Thomas on May 17, 2022
in folk, singer-songwriter
as Victor Mucho 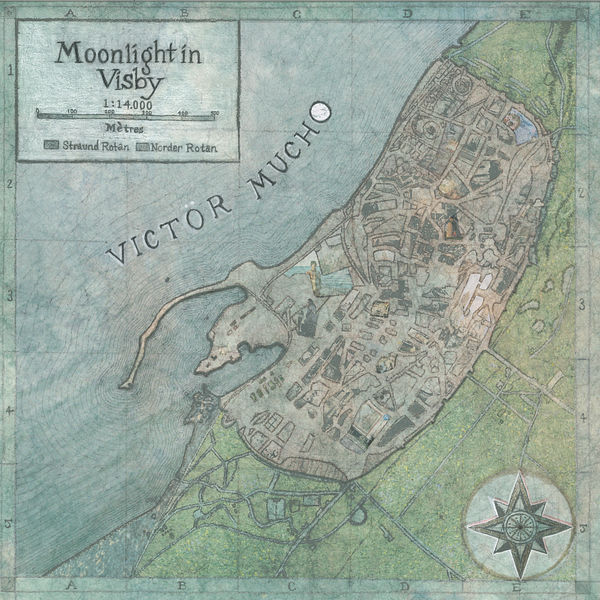 When Brian Macdonald and his wife moved to Sweden in 2020, the last thing on his mind was recording an album, much less assuming a new persona as Victor Mucho. However, plans change and taking a long-planned break from Judah and the Lion, he suddenly found himself writing songs from a new perspective, eventually creating a new album, Moonlight in Visby. In this tiny, rural Swedish town, on an island in the Baltic Sea, amidst medieval defence walls and Viking ruins, he began to discover who he was and created a soundtrack to the stillness and isolation that enveloped him.

Armed with his mandolin and a guitar bought from a woman on the island, he found a respite from his usual identity and began to create songs that more directly dealt with who he was and what he was becoming. Sitting in his bedroom at 221 degrees SW, he could look out on a landscape parallel to the one he inhabited in Nashville. What he saw and who he was becoming while his wife was in school led him to reflect on this new life, leading to the emergence of this new personality.

With the help of Swedish producer Tobias Fröberg, Moonlight in Visby became a recording of the experiences of a man a world apart from his home, coming to grips with living in a foreign landscape and experiencing life with a newfound sense of freedom. Amidst the gentle waves of guitar and mandolin on “so terribly hurt,” Fröberg adds a mix of other instruments as Macdonald sings, “I know our forever/ Is stronger than any of my words”. In contrast, Molly Parden adds a notion that implies a weathering of their relationship, “But I can’t forget the past/ And all the questions that you never asked.” While storm clouds may be rolling in, there is also a sense of hope for the relationship. Written and recorded during a dark Swedish winter, Macdonald reflects on the song, stating it “… embodies the cold, lonely side of love. The person you love most is also the person you are capable of hurting the most.”

With Fröberg providing the keyboards to “Many Moons”, Macdonald encapsulates his view of the song. “It is the heartbeat of the album. In my point of view, the moon is a symbol of love. When you look up at a crescent moon, only a sliver is visible, but in reality, the entire thing is still floating there. That’s kind of how I view love: even though the light ebbs and flows, and it can be hard to see the whole thing, the love remains constant and always becomes full again.”

Additionally, we get insights into his life abroad in songs like “Coffee in Bed” and “the List” that show a deepening of his love for his wife and examine new ways of living.

Taken altogether, Moonlight in Visby gets to the core of Brian Macdonald and his alter-ego, Victor Mucho. What emerges is a picture of a man who has become more comfortable with who he is and what he is becoming. Who could ask for anything more?