Posted by Green on October 24, 2020
in pop, rock
as Various Artists 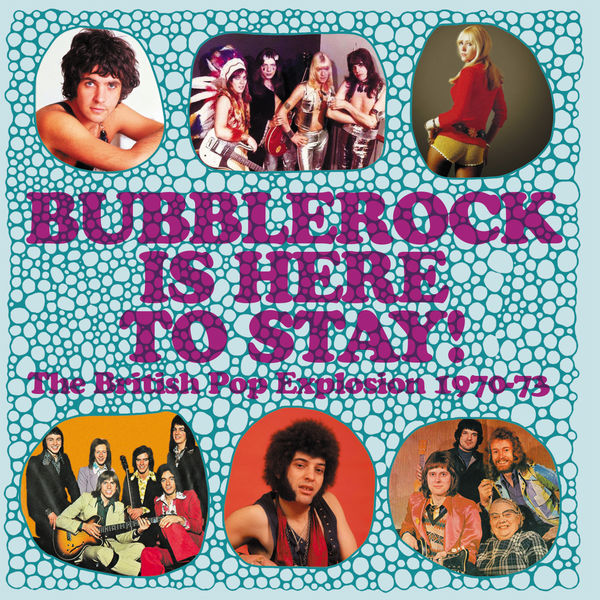 At the dawn of the Seventies, British rock bands were either on the road, playing to the adoring masses or fooling around in hotel rooms with groupies and mud-sharks, or holed up for months on end recording their latest triple-album sets for stoned student hairies.

But while their older brothers were getting it off on that revolution stuff, young teens in the UK were glued to pop radio (which, prior to commercial stations opening in 1973, effectively meant Radio One and Luxembourg) as the backroom boys of the traditional pop industry assumed total control of the airwaves.

Shining a searchlight on the lost and often murky world of early Seventies British pop, the 3-CD set Bubblerock Is Here To Stay! crams 85 sub-three minute nuggets into four hours of innocent, hook-laden fun as we focus on the faceless studio creations, ubiquitous session musicians and carefully nurtured pop idols as they battled for the hearts, minds and pocket money of the nation’s pop kids.

All are featured herein, together with numerous doe-eyed youths that were being groomed by the men in suits for teen pop pin-up status: some of them made it (David Essex, The Bay City Rollers), and some of them didn’t (Simon Turner, Gary Warren, Ricky Wilde).

More than a dozen major hits of the era (none of which you’ll hear on the many Classic Rock/Pop radio stations of 2020) are joined by a huge number of bizarre one-offs: Vivian Stanshall’s idiosyncratic remake of Elvis hit ‘Suspicion’ (promoted by Stanshall and producer Keith Moon dressing up as Nazi SS officers), The Sad’s terrace anthem chant of rampant bisexual promiscuity, ‘My Boy Lollipop’ star Millie giving Nick Drake a ska-pop pasting, Bill Fay making an unlikely stab at pop stardom (with the previously unissued ‘I Can’t Hide’) and Jon Pertwee eyeing a Dr. Who-related novelty hit single.