Posted by admin on June 9, 2021
in alternative rock, experimental
as Tom Waits – Orphans 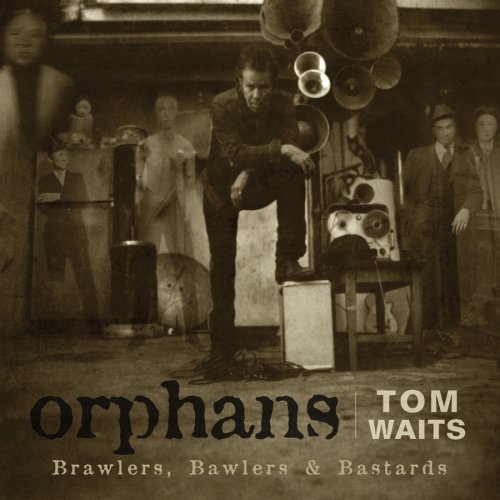 We haven’t got a new Tom Waits album in years, but we will be getting a series of reissues.Tom Waits explains: “This restoration project could arrogantly be compared to restoring a faded tapestry, a painstaking process that requires meticulous attention to each color faded thread. Spending months on something completed once, many years ago was necessary though cursedly laborious for us.” Working alongside his wife and musical collaborator, Kathleen Brennan, Waits personally remastered each of the six releases.

“Orphans: Brawlers, Bawlers & Bastards” is a limited edition three CD set by Tom Waits, originally released in November 2006. The album is divided into three sections, with each disc being a separate collection in its own. It borrows from Tom Waits’ rock sound, with the first disc being blues and rock-based, the second centred on slow-tempo, melancholic ballads, and the third on more experimental compositions. Additionally, the record contains influences of other genres, including folk, gospel, jazz and roots music. Orphans: Brawlers, Bawlers and Bastards received universal acclaim from critics, who lauded its experimentation and composition, as well as Waits’ vocals. It was listed as one of the highest-scoring albums of the year in Metacritic, and was nominated for a Grammy Award for Best Contemporary Folk Album. Furthermore, it was a fair commercial success, charting in the United States Billboard 200, as well as in Australia, Switzerland and Austria, reaching the top twenty in the latter.