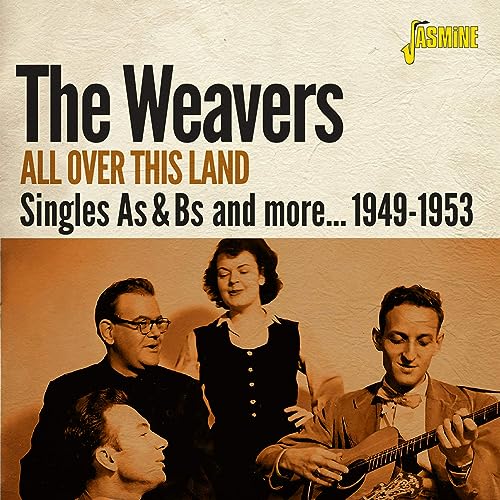 More than any other group of their era, it was the Weavers who made American folk song accessible to the record buying public in the 1940s and 1950s. Their influence on generations of folk groups – from the Tarriers and the Kingston Trio, to the Seekers and beyond – is as enormous as it is incalculable.

Before becoming the victims of a Communist witch-hunt, the Weavers were without peer in their field of music, popularising and making hits of future staples of The Great American Songbook such as ‘Goodnight Irene’, ‘On Top Of Old Smoky’, ‘Wimoweh’ and ‘If I Had A Hammer’. Their unwarranted fall from grace was happily suffixed by a return to popularity in the late 50s – but it’s on the records they made between 1949 and 1953 that their reputation will forever rest.

All those records are included in this new Jasmine 2CD collection, which brings together the A and B sides of every 78 and 45 their label Decca issued between 1950 and 1953, plus the contents of their two albums for the label and some earlier, independently-issued recordings – including their first version of ‘If I Had A Hammer’ (as ‘The Hammer Song’).

The sophisticated musical arrangements of many of these tracks, by the legendary Gordon Jenkins, serve to enhance rather than detract from Pete Seeger, Ronnie Gilbert, Lee Hays and Fred Hellerman’s presentation of their musical messages.

Superb music, mastered, as always, from the finest available sources and reopening a window on a time when American popular music was changing and evolving rapidly – and looking increasingly towards folk and blues to provide new stimulus for a growing record buying public.