Posted by Green on December 19, 2018
in rock
as The Steve Miller Band 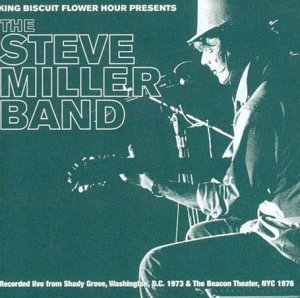 The two discs of Steve Miller Band: On Tour 1973-1976 feature two Steve Miller Band concerts recorded in 1973 and 1976, respectively, by (and for eventual broadcast on) the infamous King Biscuit Flower Hour. The soundboard recordings are pristine, with each bandmember occupying an equal part of the spectrum. The 1973 incarnation, captured at Shady Grove in Washington, D.C., still holds some connection to the earlier, more blues-based years of the band. As such, the disc contains a good deal of blues-rock jamming, much of which is admirably tight, though it falls prey to some of the era’s excesses. Also contained is an early version of “Fly Like an Eagle,” which Miller road-tested in several versions before setting it to wax. Following extensive touring around that period, Miller took an extended hiatus from the road, during which time he recorded both Fly Like an Eagle and Book of Dreams, what would prove to be his two most successful albums. Following the recording of those albums, Miller took to the road again, with a new band featuring Gary Mallaber, Lonnie Turner, Norton Buffalo, David Denny, and Byron Allred. The music is different, too. The blues influence is still there, but the band is sleeker and more modern. They have Miller’s catalog of soon-to-be-classics at their disposal, and make good use of them, including good renditions of “The Joker” and the revamped “Fly Like an Eagle.” The band’s sound, though perhaps even more grounded in the era than the 1973 band, is also more original, regardless of whether or not one enjoys what they are doing.