Posted by Green on November 6, 2019
in country, folk
as The Local Honeys 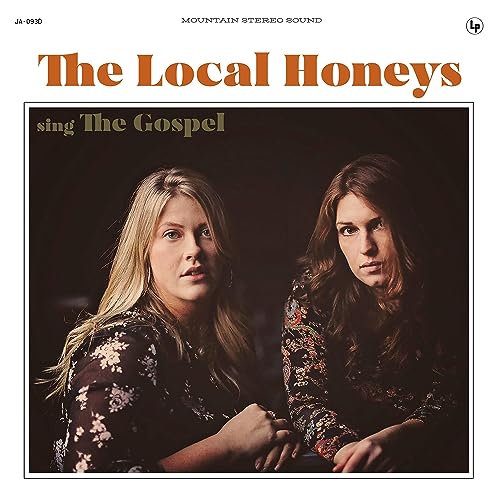 s the title clearly states, the follow-up to their 2015 debut, Little Girls Actin’ Like Men, find Kentucky duo The Local Honeys featuring Montana Hobbs and Linda Jean Stokley (augmented by fiddle player Megan Gregory) digging into the spiritual tradition of the Appalachians. The album features a dozen gospel songs, some well-worn with age, others little used and at least one that will be better known outside gospel circles, although the only actual traditional number is Amazing Grace, here recorded live in the traditional Appalachia, a capella style of lining out, essentially a call and response, with a congregation of friends and family at Meadowgreen Appalachian Music Park.

The other material is a mix of old and relatively new songs by a wide assortment of writers. They open the hymnbook with an old time bluegrassy treatment of Loretta Lynn’s 1965 hit Everybody Wants To Go To Heaven featuring Chelsea Nolan on snare drum before rolling back the years for Let The Church Roll on, the William York-penned number variously recorded by The Carter Family, Flatt & Scruggs, Mahalia Jackson and Doc Watson, spotlighting banjo picking from Will Parsons, Stockley on lead with added harmonies from Hobbs, Gregory and Anna Kline.

Collected by Alan Lomax in 1942, I’m Going Home On The Morning Train comes from the singing of Kentuckian Molly O’Day, while, another sprightly banjo and fiddle romp, Things In Life is bluegrass tune written in the 50s by West Virginian banjo player, Don Stover. Then, based on a true story, First Church of God, comes from Don Rogers’ 2018 album Winetown, here featuring the man himself on electric guitar with Ruth McLain Smith on bass both of whom also appear on the midtempo walking rhythm High on a Mountain which was penned by the band’s lawyer Larry Webster and features his teenage grand-daughter Ella on fiddle.

Speaking of the First Church of God, Eastern North Carolina brothers Bill and Earl Bolick were both members and, recording as The Blue Sky Boys, their I’m S-A-V-E-D playfully touches on the hypocrisy of religious followers.

Elsewhere, introduced by fiddle, By the Waters of the James comes from the late mountain music fiddler Robbie Wells, uncle to the duo’s mentor Jesse Wells, written about a house in which the family lived overlooking the James River in Virginia, with the railroad track directly below the front porch while, featuring John Looney on mandolin, the closer, We Shall Be Reunited dates back to the early 1930s and Southern gospel singer and Baptist preacher Alfred G. Karnes.

There’s many a gospel song featuring the lines about being weighed in the balance and found wanting, not least Johnny Cash’s Belshazzar, but here, accompanied by brushed snares, Weighed In The Balance, an interpretation of King Nebuchadnezzar’s dream in the Book of Daniel, comes from Kentucky-born Martha Carson who, in the mid-50s, became known as the Rockin’ Queen of Happy Spirituals because of her hand-clapping and use of electric guitar on her recordings.

I said there was one that would be likely known by non-gospel listeners and it comes with a goodtime dobro and fiddle-led hillbilly take on Plastic Jesus, a witty song with echoes of Hank William’s Settin’ The Woods On Fire about having an effigy of Jesus accompanying you on the dashboard of your car. It was written by Ed Rush and George Cromarty during the 60s Folk Revival and first released in 1962 by The Goldcoast Singers, but is probably more popularly known from Billy Idol’s 2005 album Devil’s Playground.

A departure from the secular and partly self-penned material on their debut, but remaining firmly rooted in their love of traditional Kentuckian bluegrass, there is an irresistible and infectious joy in what they do, so amen to that.