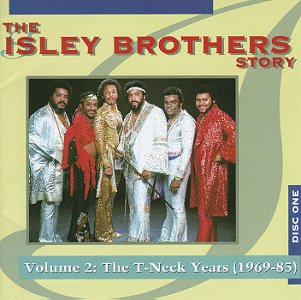 When Sony/Legacy decided to reassert control of the Isley Brothers’ catalog, it sent Rhino’s excellent two-volume set The Isley Brothers Story out of print. Unfortunately, thus far, Legacy hasn’t done nearly as good a job re-compiling the Isleys’ catalog in any coherent fashion, meaning that if you can track down the Rhino anthologies somehow, you’ll be much better off. The Isley Brothers Story, Vol. 2: The T-Neck Years is a double-disc look at the group’s transformation from a vocal R&B group into a self-contained, instrumentally proficient funk band — simply by adding more family members. After landing a comeback hit with 1969’s “It’s Your Thing,” the core trio of Isleys added younger brothers Ernie (guitar) and Marvin (bass), plus cousin Chris Jasper on keyboards. Together they crafted a loose, jam-friendly brand of funk that could be sweet and smooth or swirling and trippy, loaded with group vocals, Hendrix-style guitar, and bubbling synths. There’s a little bit of jazz in the chord progressions, and a whole lot of rock feeling in the grooves, which have been heavily sampled over the years by hip-hoppers. Early in this phase, the group underlined its debt to rock by covering pop and rock tunes, represented here by “Love the One You’re With,” “Spill the Wine,” and “Summer Breeze” (no “Lay Lady Lay,” however). As time progressed, the Isleys made a few concessions to the discotheque, but never radically altered their blueprint. By the time the collection winds up with the Isley-Jasper-Isley spin-off group’s 1985 R&B smash “Caravan of Love,” it’s clear that the Isleys’ seemingly endless adaptability was no mere fluke — at their best, they had a genuine feel for just about any new trend that contemporary R&B could throw at them. Hopefully Sony will do them this kind of justice someday.