Posted by admin on September 14, 2020
in alternative, psychedelic, rock
as The Flaming Lips 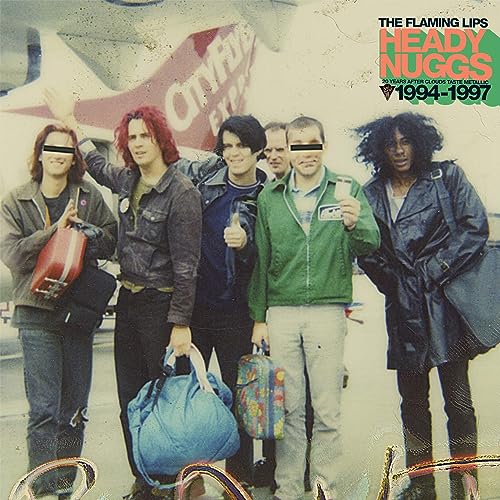 Clouds Taste Metallic, the band’s seventh album, is considered one of The Lips’ best and earned them much critical fanfare. All-Music called it “a masterful collection that completesthe Flaming Lips’ odyssey into the pop stratosphere” and compared it to the Beach Boys’ definitive album Pet Sounds. Released on September 19th, 1995, Clouds Taste Metallic is also the last Lips album to feature guitarist Ronald Jones.

Heady Nuggs 20 Years After Clouds Taste Metallic 1994-1997, will be released in several configurations, including a three-CD set (plus digital equivalents) and a numbered, limited edition five-LP box set. (Individual vinyl LPs will be released at a later date.) The Official FlamingLips Store will carry an exclusive numbered and colored vinyl version of the five-LP box set along with three exclusive out-of-print t-shirts and three out-of-print posters, designed by Wayne that were originally sold during the Clouds era, that will belimited to a one time run. The CD set will include three discs. The first features the entirety of Clouds Taste Metallic plus the rarities The King Bug Laughs (Oddities and Rarities) (a collection of previously unreleased, promo-only, and compilation-only tracks gathered together and available for the first time ever in one place). The second is a promo-only compilation CD entitled Due To High Expectations The Flaming Lips Are Providing Needles For Your Balloons, and the third is a previously unreleased live recording of the band’s club show at Moe’s captured in Seattle on May 10th, 1996.