Posted by Green on March 31, 2020
in blues-rock
as The Derek Trucks Band 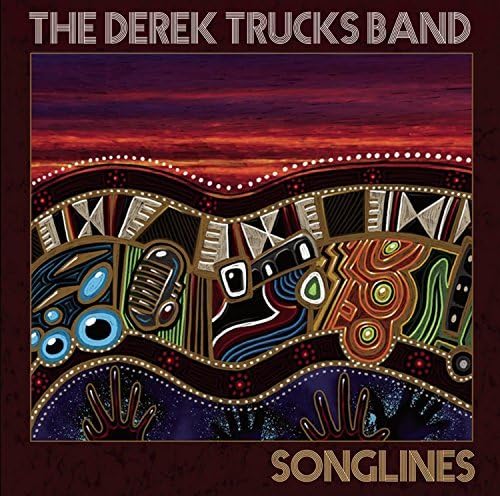 This is, perhaps, the one. Derek Trucks has been on an aesthetic quest for something since he began his own recording career in 1997 — apart from his membership in the Allman Brothers Band. Each record has gone further into establishing Trucks not only as a slide guitar wizard (that happened when he was still in his teens), but also as a serious songwriter, fine arranger, and bandleader. The Derek Trucks Band, as evidenced by the release of 2003’s Soul Serenade, is a unit — a band — whose core has been together for eight years. They create an atmosphere, a sound, a musical sense of place and community. On Live at the Georgia Theater (available only on the Internet), the DTB performed with new vocalist Mike Mattison, who gave them something they needed: a strong, utilitarian presence that could be as diverse and adventurous as the band was musically. This album’s title, Songlines, was inspired by the late author Bruce Chatwin’s description of aboriginal creation myths. According to these myths, the world was sung into existence by totemic elder beings who wandered the Australian continent along invisible pathways. These were later known as “songlines” because by singing out the names of everything — trees, flowers, streams, animals, clouds, earth — they breathed form, order, and beauty into a world that was being born. The DTB try to express something similar on their first real studio recording with assistance by producer Jay Joyce. This album was not recorded trying to capture a live performance in the confines of a studio. There are no tracks here that give way to loose jamming; these are songs. In fact, it was carefully crafted and executed. But the rawness, the energy, and the unpredictable musicality are everywhere present.
They are there in the brief read of Rahsaan Roland Kirk’s “Volunteered Slavery” and Nusrat Fateh Ali Khan’s “Sahib Teri Bandi/Maki Madni,” both of which are live staples, and the slippery read of Toots Hibbert’s “Sailing On” — but also in the raw, rangy American street blues of “Chevrolet,” by Lonnie and Ed Young, and the low-down seductive vintage funky R&B in “All I Do.” Kofi Burbridge’s Hammond B-3 and keyboard work create a center for Trucks and the formidable rhythm section of drummer Yonrico Scott, percussionist Count Mbutu, and Todd Smallie on in-the-pocket bass. The originals on the set are leaner, meaner, and more down in the groove — check out the group vocal chants on the refrain of “Revolution,” as Trucks slips and slides over them. The skittering funky organ lines and Trucks’ twinned slide riff and edgy fills give “All I Do” its slippery backbone-dropping groove. “Majoun” (a Moroccan word for pot) is the kind of drifting, Eastern-tinged jazz that the band is known for playing live. And the fascination with the East doesn’t end there. In the soul and gospel-drenched declamatory prayer “I Wish I Knew (How It Would Feel to Be Free),” there is some fine Dobro work by Trucks and Burbridge’s upright piano strides it out, before Trucks brings out the electric again and lets it slowly tear through the verse and chorus accompanied by handclaps. It’s deeply moving. The set closes with “This Sky,” a gently evolving open modal tune. Trucks’ guitar is tuned to whole tones and he explores the mode thoroughly yet softly, mannered until he finds its bottom where bass, drums, the B-3, and percussion slip in to carry the tune. And as Mattison enters with the lyric (some of it by the Sufi poet Hafiz), the listener is already hooked in the image of the story, of suffering lovers who should be dancing in the ecstasy and beauty of the sky where they live. Songlines is the finest moment in the Derek Trucks Band’s recording career. It’s a fully mature, deeply reckoned studio album that bears repeated listening to reveal all its subtlety and the beauty of its creation.