Posted by Green on December 10, 2019
in fusion, jazz
as The Comet Is Coming 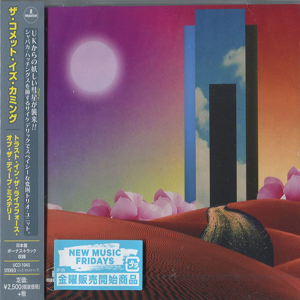 England’s sci-fi jazz trio the Comet Is Coming have been exploring the cosmos since 2015 when drummer Maxwell Hallett (Betamax) and keyboardist Dan Leavers (Danalogue) were playing a gig as futurist duo Soccer96 when they encountered Shabaka Hutchings (King Shabaka) hanging near the stage with a saxophone. They invited him up and improvised. Received enthusiastically, the trio formed the Comet Is Coming to explore a mutual love of Sun Ra, John and Alice Coltrane, Mahavishnu Orchestra, and future-forward electronica. After issuing the critically acclaimed Prophecy EP in 2015, they followed with the full-length Channel the Spirits a year later and were nominated for the Mercury Prize. Hutchings, one of the U.K.’s most prominent young saxophonists and bandleaders, inked a deal with Impulse! in 2017, and brought Comet Is Coming in. His Sons of Kemet project’s acclaimed Your Queen Is a Reptile in 2018, a stellar work of modern modal jazz, was internationally acclaimed. Trust in the Lifeforce of the Deep Mystery picks up where Channel the Spirits and its follow-up EP Death to the Planet left off as it attempts to “envisage a 21st century take on spiritual jazz that is part Alice Coltrane, part Blade Runner.” Their association with the legendary American label –home to many of their influences — raises expectations that are both warranted and met.