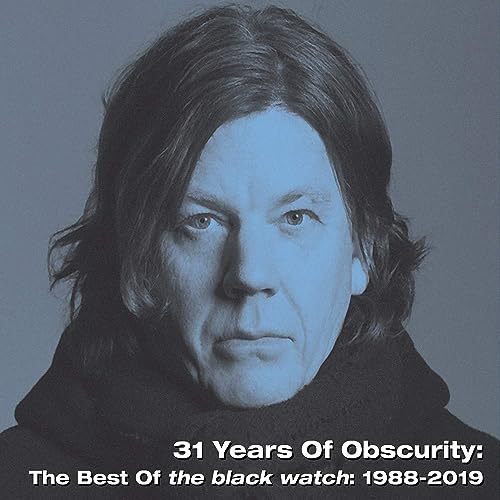 Galvanized by the ’90s’ scuzzy insurgency of Nirvana and other grunge subversives, who suddenly found themselves squinting at the glare of newfound discovery, the great escape of that decade’s indie-rock underground occurred. John Andrew Frederick’s The Black Watch has long remained trapped below, despite the many failed rescue operations of adoring critics to save them from being completely forgotten.

Keenly aware of the highly literate and tunefully melancholic indie-rock aesthetes’ relative anonymity, Frederick and company named their newest 22-track compilation 31 Years of Obscurity: The Best of The Black Watch: 1988-2019 with self-deprecating honesty. Serving as a perfect gateway drug, the subtly addictive single-CD “greatest hits” set is a sometimes thorny bouquet of black post-punk roses, including the artfully noisy squall “I Don’t Feel the Same” and the sharply etched, hook-filled flower “Georgette, Georgette,” and affecting, string-laden folk lushness that floods “To William, My Father, Who Brought Home Books on India,” “The Tennis Playing Poet Roethke Said” and the breathtakingly beautiful “Christopher Smart (1722-1771).”

Full of philosophical treatises, surreal psychological studies and poignant vignettes of unfulfilled lives, modern anxiety, heartfelt love songs and tangled relationships, Frederick’s lyrics reveal an acerbic wit, even if it’s deeply embedded in something as instantly memorable and catchy as the relaxed and upbeat charmer “Beautiful” – complete with handclaps and a sighing chorus – or caught up in the flowing psychedelia of “Emily, Are You Sleeping?” Even more of a rush, “Terrific” glides along the same clean, New Wave rails as New Order, as the autumnal chase of soft, acoustic guitar strum and barreling piano in the cardigan-clad “Obligatory Blues” brings to mind Belle and Sebastian. And those looking for evidence of Nick Drake’s influence may find it in the woodsy folk of “Moonlight Thru Ivy.”

The noble campaign to shed a light on the moody beauty of The Black Watch is in full swing, with rare reissues gathered together for The Vinyl Years: 1988-1993 and a complete career retrospective The Completed Works: 1988-2019 – available only on a limited-edition USB thumb drive – as part of the invading horde of newly issued recordings. The newest dispatch from The Black Watch’s shadowy world is Magic Johnson, a worthy addition to the catalog, which darkly burns and shimmers with the rippling and watery “April Fools,” “Get Me Out of Echo Park,” “Eustacia’s Dream” and the starry-eyed “Oh Mary,” as the galloping ghost “Me & You & Me” makes for a thrilling nocturnal race to catch up to Echo and the Bunnymen’s blend of urgency and mystery. Also included here is The Paper Boats EP, an alluring combination of low rumbles, well-defined song structures and rainy melodies fit for a day indoors with one’s books.

An academic and a novelist, Frederick pens a lively, touching and often funny group history that accompanies 31 Years of Obscurity: The Best of The Black Watch: 1998-2019. It pays homage to the musicians who’ve helped Frederick shape and realize his visions, as well as those who’ve helped spread the gospel and supported the cause, and when consumed while getting lost in these works, it feels like an engaging and nostalgic conversation in a pub over pints.