Posted by Green on October 23, 2018
in acoustic, southerrn rock
as The Allman Brothers Band 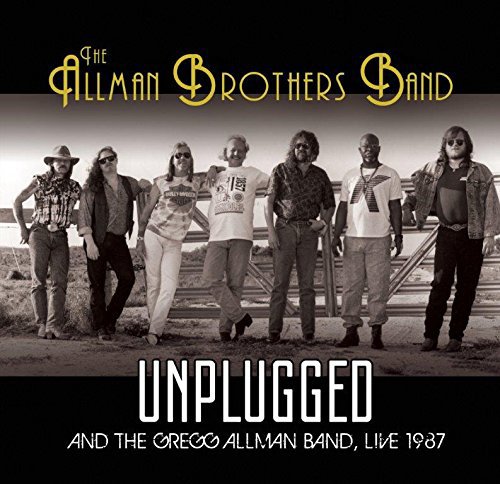 The Allman Brothers Band featured on the penultimate episode in the very first season of MTV Unplugged, and were precisely the kind of act that producers Robert Small, Jim Burns and Jules Shear had in mind when creating the show. Taking place on the 19th of November 1990, the performance on Unplugged came just over a year into the Allmans reunion, the group having parted company in the early 80s. Reformed around guitarist Warren Haynes, from Dickey Betts solo outfit, and bassist Allen Woody, the band was enjoying something of a renaissance, brought on by both a late 80s nostalgia for the classic rock acts of the 60s and 70s as well as the chart success of their career-retrospective box-set, Dreams. In the summer of1990, the Allmans released their ninth studio album, and first for nearly a decade, Seven Turns; it confirmed that the Allman Brothers Band was back. And so the MTV performance arrived while the Allman s were riding high as a rehabilitated band touring a successful album. Performing at the National Video Center, New York City, the band re-imagined two much-loved classics from their hey day, Midnight Rider and Melissa, alongside their newest single, Seven Turns, and a nod to their acoustic blues influences with a cover of Robert Johnson s C mon In My Kitchen. It s a stunning performance, foregrounding Gregg Allman s vocal ability while also showcasing the dimension that Warren Haynes now brought to the band. Included here alongside the Unplugged set is a solo performance from Gregg Allman as part of his 1987 comeback with I m No Angel an album which set the Allman s reunion in motion. Broadcast from Auditorium Shores, Austin, Texas on May the 25th 1987 for The King Biscuit Flower Hour, the show finds Gregg in triumphant form as he essays a sizzling set of material from I m No Angel alongside Allman s standards and blues classics.