Posted by Green on July 18, 2019
in southerrn rock
as The Allman Brothers Band 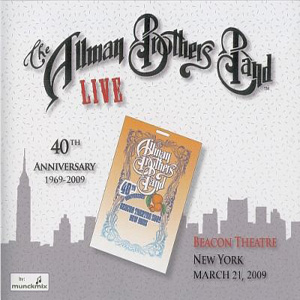 To commemorate their 40th anniversary, The Allman Brothers Band is releasing a Beacon Box live CD package, capturing all 15 sold-out shows from the group’s March 2009 stand at the venerable Beacon Theatre in New York City. This is the first time the band has made CDs available from their annual visits to New York, which date back to 1989 and includes 188 consecutive sold-out shows at the Beacon. Individual shows will be available as well. Delivery of these legendary concerts has already started and all are expected to be in stock by mid November at www.hittinthenote.com.

This run was dedicated to the memory of Duane Allman, seminal guitarist and founder of the band, and to help celebrate Duane’s legacy, 62 special guests shared the stage with the Allman Brothers Band. The list includes a “Who’s Who” of rock, jazz and jams greats, including Levon Helm, Taj Mahal, Buddy Guy, Boz Scaggs, Johnny Winter, Sheryl Crow, Widespread Panic’s Jimmy Herring and John Bell, Kid Rock, Billy Gibbons, Los Lobos’ David Hidalgo and Cesar Rosas, Bob Margolin, Phish’s Trey Anastasio and Page McConnell, Chuck Leavell, Jimmy Hall, Susan Tedeschi, Bob Weir, Phil Lesh and many others. Also appearing for two nights with the band was the inimitable Eric Clapton, who teamed with Duane Allman to record Layla and Other Assorted Love Songs in 1970, considered by many critics to be the finest guitar album of all time. This marked the first occasion that Clapton had played with the Allman Brothers Band in a public setting.

The fact that the band performed at its considerable best in its 40th year is a remarkable testament to the talents of this Rock and Roll Hall of Fame group. All the magic of their timeless classics, newer tunes and spectacular cover songs shines through on the Beacon Box live CD package. The 15 historical shows, containing 100 different songs, will be packaged in a custom-made, hand-crafted, serial numbered box and will have the Beacon Theatre’s marquee silkscreened across the front. In addition to the Beacon concerts, this box set will include a special bonus performance of the Allman Brothers Band at Warren Haynes’ 20th Annual Christmas Jam, which occurred in December of 2008. Also included in the box set edition will be a CD booklet with liner notes, set list and exclusive photos taken during the run by ABB Tour Mystic, Kirk West. Shows are available on an individual basis as well, so take advantage of this once in a lifetime offer to savor a once in a lifetime event. Please visit www.hittinthenote.com. for set list, show descriptions and ordering info. – allmanbrothersband.com