Posted by Green on July 15, 2021
in blues-rock
as Tedeschi Trucks Band 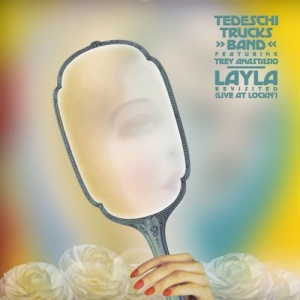 Recorded Saturday night, August 24th, 2019 in Arrington, VA, ‘Layla Revisited (Live at LOCKN’)’ captures Tedeschi Trucks Band at their incendiary best. The band’s collaboration with Phish’s renowned guitarist/vocalist, Trey Anastasio, was one of the four-day music festival’s most anticipated performances. Simply billed as Tedeschi Trucks Band featuring Trey Anastasio, fans were kept in the dark about their plans to perform the Layla album in its entirety until the moment the band took the stage. One listen and it’s clear that their surprise performance-which also included close TTB collaborator, guitarist and songwriter, Doyle Bramhall II-meant something extra special to both the musicians and the astonished fans who were lucky to experience it.