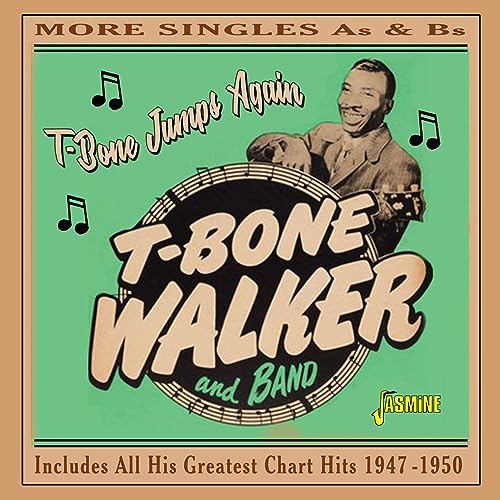 This is Jasmine’s second look at the influential career of Aaron T-Bone Walker. The first volume (JASMCD3051) covered all of his single releases on Imperial and Atlantic records between 1950 and 1955. Volume 2 is therefore more of a prequel backtracking into his recording career on the independent labels Black & White and Comet.

There are several r&b charts hits herein including his greatest – the exceptional ‘Call It Stormy Monday But Tuesday Is Just As Bad’ a song so prolific it has gone on to become one of the most popular blues standards.

One of, if not the most innovative of all of the electric blues guitar players. Chuck Berry named Walker as one of his main influences. B.B. King cited hearing Walker’s recording of ‘Stormy Monday’ as his inspiration for getting an electric guitar. He was admired by Jimi Hendrix, who imitated Walker’s trick of playing the guitar with his teeth and Steve Miller stated that in 1952, Walker taught him how to play his guitar behind his back and also with his teeth and considers him a major influence on his career.

Fans of electric guitar in particular blues guitar can’t fail to be swept up in the excitement of these 26 classic recordings.