Posted by Green on May 1, 2020
in folk-rock, singer-songwriter
as Steve Forbert 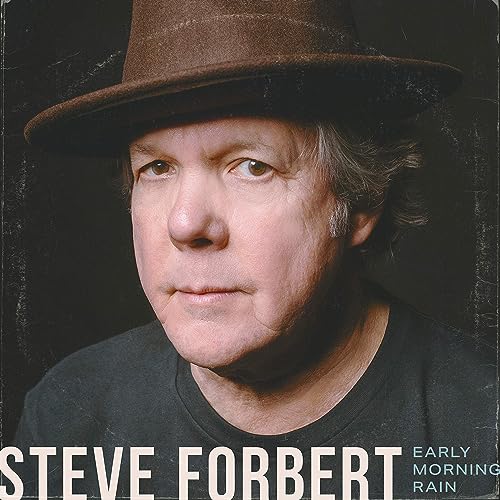 With his latest album, Early Morning Rain (Blue Rose Music), prolific singer/ songwriter Steve Forbert celebrates a number of his fellow songwriters from over the years with an album of eleven handpicked cover songs meant to highlight the craftsmanship of their respective songwriting and songwriting in general. Over a career that has spanned six decades, Forbert himself has released twenty albums, has played countless live shows, and had his songs covered by such artists as Keith Urban, Rosanne Cash, Marty Stuart, and John Popper, to name just a few.

The choices of his songs for this record are inspired and varied and cross decades and national borders, highlighting how big of a music fan Forbert himself has always been. Thematically speaking, the choices are diverse as well with Forbert singing about loneliness, grief, love, equality, heartbreak, sexual passion, betrayal, and social justice among other things on this record with the other artists’ songs as vehicles.

After paring down his list from scores of choices that he admittedly had, it’s worth noting that Forbert’s exceptional choices to illustrate superior songwriting are: Gordon Lightfoot’s lonesome and poignant “Early Morning Rain,” the Grateful Dead’s pensive and moving “Box of Rain,” Elton John’s graceful and heartening “Your Song,” the Kinks’ exuberant and cheery “ Supersonic Rocket Ship”, Richard and Linda Thompson’s sad and heartwrenching “Withered and Died,” Ian and Sylvia’s hopeful and wistful “Someday Soon,” Charlie Walker’s forlorn and woeful “Pick Me Up On Your Way Down,” Leonard Cohen’s touching and passionate “Suzanne,” the tragic and stirring folk and blues classic “Frankie and Johnnie,” Danny O’ Keefe’s reality-soaked and heartfelt “ Good Time Charlie’s Got The Blues,” and Bob Dylan’s rousing and spirited “Dignity.”

While there are individual highlights on the record like the title track and the Kinks’ and the O’Keefe covers respectively, Forbert’s captivating ability to interpret other artist’s songs in a fresh and lively manner is on full display on all of these songs as is his evocative guitar playing and singing, which have long been hallmarks of his work.

With Early Morning Rain, Forbert succeeds in showing the listener what a great song should sound like and further adds to his reputation of being one of this country’s biggest folk music treasures.