Posted by Green on September 25, 2020
in blues, jazz, swing
as Squirrel Nut Zippers 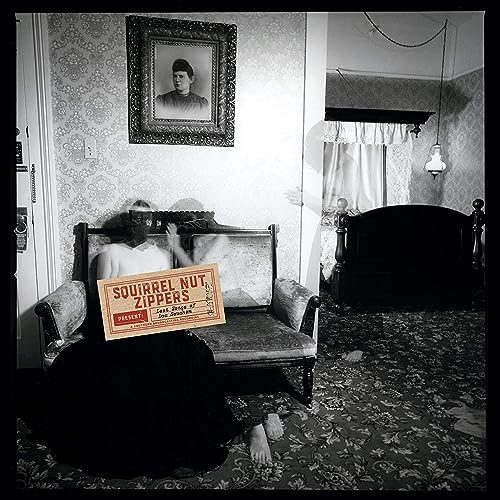 Jimbo Mathus and his crew continue to convert and subvert vintage jazz on this set, “inspired by all the mysterious characters from the history of New Orleans jazz music”. Edmond “Doc” Souchon may not have been that mysterious, as he was a guitarist and writer of jazz, but he was indeed instrumental in the New Orleans jazz revival. And whether these songs were ever “lost” is also another question, but really, who cares? This is another excellent Squirrel Nut Zippers album.

The band continues on its own merry way. While others may have picked up on it, but no one does it better. Here we get not only the band’s own warped, sorry, individual take on jazz , as on opening track, Jelly Roll Morton’s “Animule Ball”, with its elements of Duke Ellington’s 1920’s “jungle” sound, but vintage pop as well. Frankie Valli’s ‘60s hit, “Can’t Take My Eyes Off You”, sounds like a mid-’60s beat band jamming with a tango orchestra, and later a French film soundtrack, all sung by Gomez Addams.

“She’s Ballin’’ is a jumping big band blues, in total contrast to the initially folky “Train On Fire”, where violinist Johnny Bird returns to the fold for the first time since 1998. Lend an ear as well to the violin on the klezmer/ jazz of “Purim Nigrum”. Then there we are treated to a torch ballad in Mathus’ own “Mr. Wonderful”, the zany jazz/ blues of Fred Lane’s “I Talk To My Haircut”, the fine pure New Orleans approach of “Cookie” and the upbeat standard “Happy Days Are Here Again”. The closer is a string band accompanied Stephen Foster song, ‘Summer Longings’ beautifully and very formally delivered!

So yes, more of the same and more of the unexpected, but do expect this band’s current roll to continue. ~Norman Darwen