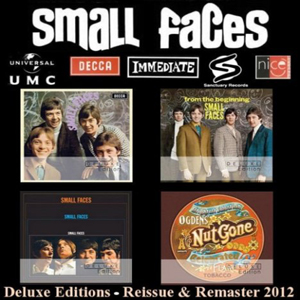 There were very few people in the UK who hadn t heard of the Small Faces in the UK in the late 60s. This, their debut album was a smash hit when released in 1966. It includes the hit singles Whatcha Gonna Do About It and Sha-La-La-La-Lee. The surviving members Kenney Jones and Ian McLagan have overseen the remastering of this double disc album. The second disc features rare outtakes, versions and mixes and the new booklet features sleevenotes by respected music writer Mark Paytress.
From The Beginning: New 2012 remastered Mono reissue of 1967 second Decca album expanded with 21 bonus tracks including alternate mixes, alternate backing tracks, different versions etc.
Small Faces (Immediate): New 2012 remastered reissue of their 1967 album on Immediate Records featuring both mono & stereo versions! Includes 17 bonus tracks taken from alternate mixes etc.
Ogdens’ Nut Gone Flake: The two-act concept album consisted of six original songs on side one and a whimsical psychedelic fairy tale on side two relating the adventures of Happiness Stan. It is a seminal album and has appeared in All Time Greatest album polls by the likes of Q and NME and appeared in Mojo s Hall of Fame . The Guardian described it as a groundbreaker, but not just because of its circular sleeve or its psychedelic concept – it was more far-out than that: by unleashing such a split-personality array of songs, such as Lazy Sunday, Rollin’ Over, Afterglow, Rene and Happydaystoytown, the Small Faces left listeners at the very crossroads of rock and pop.