Posted by Green on February 10, 2020
in british folk
as Shirley Collins 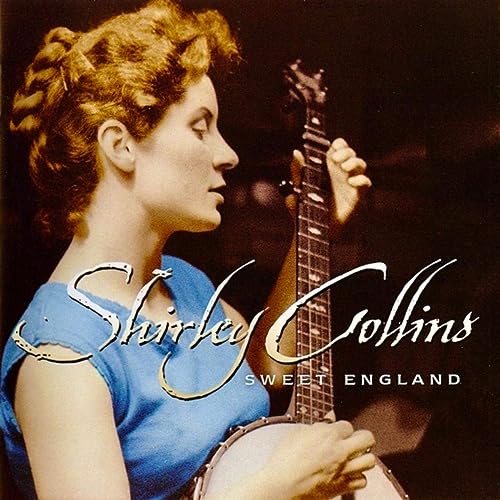 weet England, eighteen love songs and ballads “from Southern England” sung by Shirley Collins (Argo LP RG150), carries a sleeve-note in which Alan Lomax predicts that within ten years Miss Collins could be a major artist. He may be right, but at the moment I should like to hear more assurance and more variety in her singing. It is right and proper for a folk singer to sound anonymous, but that is hardly the same thing as lacking presence. Nevertheless, this is a useful collection of songs, including such delightful items as The Cuckoo and The Bonny Labouring Boy. It seems a little odd, though, to find an Irish, a New Zealand and three American songs in the line-up, even if one of the American items—Omie Wise, a mountain murder ballad—is given the dead-pan, faintly sardonic treatment it demands. Purists may also object to the accompanying banjos and guitars, which add an extra transatlantic flavour to the music. Similar criticisms can be levelled at The Foggy Dew (Collector JEB3), on which—in addition to the title-song—Miss Collins sings Brigg Fair, The Berkshire Tragedy and Geordie. Fuzzy recording doesn’t help to improve matters.