Posted by Green on April 8, 2020
in country, folk
as Shelby Lynne 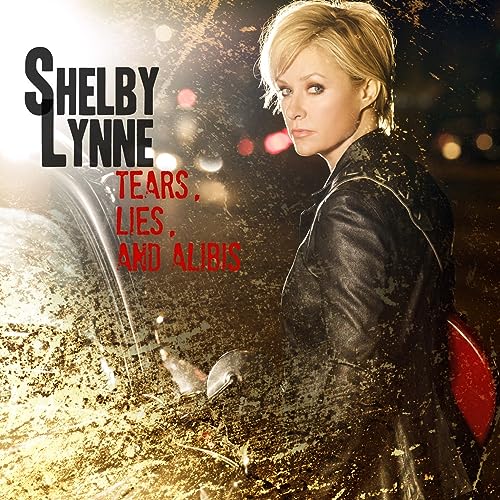 Given the wonderfully mercurial, fiercely independent persona Shelby Lynne has displayed throughout her career (one that has inspired fans and infuriated record company executives) her first self-produced, self-released effort might have been fraught with egocentric excess. Many artists have fallen into that trap. But they don’t have her backbone and keen self-critical eyes and ears: Tears, Lies and Alibis, issued on her own Everso imprint, is anything but.

Produced with exquisite balance, these ten self-penned songs reflect what Lynne’s learned about the studio process in her 20 years as a recording artist. Lynne cut the basic tracks at home in Rancho Mirage with Brian Harrison and her own band; she finished them in Nashville with help from some studio guests including Muscle Shoals legends Spooner Oldham and David Hood. Production is only one part of the equation, however, songs are quite another, and Lynne hadn’t written many since 2005’s Suit Yourself. She more than compensates here. The set opens with the jaunty “Rains Came.” Acoustic guitars play a jacked-up rhythm, painted by an organ and kissed by electric guitars; Rickenbackers fill the instrumental interlude. It’s a happy song about being sad, and woodwinds underscore that acceptance at the tail-end. Seamlessly, she shifts into the breezy adult pop of “Why Didn’t You Call Me?” as a horn section, jazzy acoustic guitars, and her own multi-tracked backing vocals blend effortlessly. It’s another sad tune that transcends its lyrics; a beautiful arrangement and midtempo groove make it shimmer. But there are tough ballads — the stark, nakedly vulnerable “Like a Fool” and the shamelessly broken-hearted confessional country waltz “Old # 7” — that showcase Lynne’s lyrical gifts as pure Americana poetry. “Alibi” is another ballad whose lovely harmonic construction belies the hurt in the protagonist’s voice as she confronts a lover’s betrayal. Her voice is unforced, relaxed, and matter-of-factly articulate in each of these songs. While there isn’t a loser in the bunch, “Something to Be Said About Airstreams,” a paean to restlessness and freedom, is a standout. Its slow tempo and lilting arrangement momentarily distract from the singer’s need to escape the heartbreak hidden just beneath the lyric. “Loser Dreamer,” an atmospheric homage to those whose self-acceptance destines them for disappointment, is memorable, as is the album’s jazz-inflected closer, “Home Sweet Home.” Tears, Lies and Alibis feels like a destination for Lynne; one she’s sought her entire career, to balance her artistic instincts and ambitions with her talents as a songwriter, producer, and singer. Summoning the bravery to go it on your own is rare — especially for an established artist. To actually pull it off it honestly, with taste and balance to boot, is rarer still.