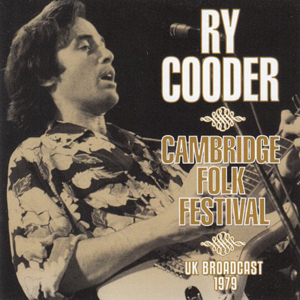 Bop Till You Drop, Ry Cooder’s eighth album, was released in July 1979 and remains the first digitally recorded major-label album in popular music, recorded as it was on a digital 32-track machine built by 3M. The album consists almost entirely of covers of earlier rhythm and blues and rock and roll classics, including Elvis Presley’s Little Sister and the 1965 Fontella Bass-Bobby McClure hit Don’t Mess Up a Good Thing , on which Cooder duetted with soul star Chaka Khan. Khan also performed on the only original track on the album, Down in Hollywood . In the same month as the record s release Ry performed at the annual Cambridge Folk Festival, established in 1965, and held on the site of Cherry Hinton Hall in Cherry Hinton, one of the villages subsumed by the university city of Cambridge, in England. The festival is renowned for its eclectic mix of music and a wide definition of what might be considered folk. It occurs over a long weekend in July each year (save for 2020, for obvious reasons). In 1979, Ry Cooder joined the line-up which also featured The Boys Of The Lough, Dave Cousins, Maddy Prior and Loudon Wainwright III, among others. Cooder headlined on the Saturday Night that time round, making him the festival s main attraction for the final year of the seventies. Performing a solo-acoustic set made up of oldies from his previous albums but, no doubt to the chagrin of Warner Brothers, not a single cut from his new release, the entirety of both performances (set 1 and set 2 are included) he gave that mystical Saturday more than 40 years ago, sounds as extraordinary today as they no doubt did at the time.