Posted by Green on February 8, 2021
in acoustic, blues
as Robert Belfour 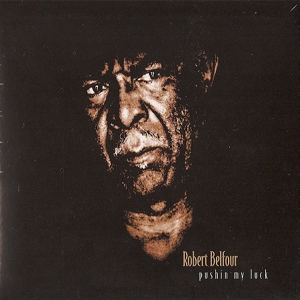 Robert Belfour’s sophomore effort for Fat Possum — at 63, he is one of the youngest artists on the roster and is by far the most “polished,” if the Delta blues can ever really be called that — proves his debut was indeed only a beginning. In stark contrast to his labelmates, Belfour strictly plays acoustic blues, but he plays them with the same dark, trancelike feel of Junior Kimbrough, haunting spookiness of Fred McDowell, rhythmic intensity of John Lee Hooker, and sprawling drawl of Lightnin’ Hopkins. Ted Gainey aids Belfour on a drum kit. While the first album was all of a piece, and everything but the vocal seemed to be recorded at the same level (and even then, Belfour couldn’t always be understood among the ringing guitars and shuffling drums), Pushin’ My Luck is nervier, a bit more edgy. Belfour’s truly nearly unbelievable singing is a bit more in the foreground, enough to add to the hypnotic repetition in his music, while the drums — played no more elaborately than Meg White’s in the White Stripes — are mixed just a tad higher, bringing it extremely close to the punch this stuff has when played in front of a live audience. Fans of Kimbrough’s guitar playing — or Ali Farka Toure’s, for that matter — will be instantly drawn to the polyrhythmic, droning chords and ambling, elegantly raw, slippery fills that Belfour plays, whether it’s on “Hill Stomp,” the title track, “I Got My Eyes on You,” “Sweet Brown Sugar,” or “I’m Gonna Leave,” which closes the set. The vibe is the same everywhere; this is deep, hot Mississippi blues full of a slow, steamy, writhing sexual vibe; twisted soul; and a sense of foreboding mystery that cannot be mentioned, let alone explained. This is the first great blues record of 2003 and if it isn’t nominated for the W.C. Handy Award, the damned foundation should be disbanded on the basis of deafness. I hope this guy lives to be a 100 and makes a record every year he’s on this planet. Forget everything you just read: This record is amazing; just buy it.