Posted by Green on February 27, 2021
in Discography, folk-rock, singer-songwriter
as Richard Thompson 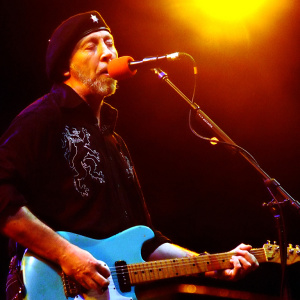 Richard Thompson (born 3 April 1949) is an English singer, songwriter, and guitarist.Thompson first gained prominence in the late 1960s as the lead guitarist and songwriter for the folk rock group Fairport Convention, which he had co-founded in 1967. After departing the group in 1971, Thompson released his debut solo album Henry the Human Fly in 1972. The next year, he formed a duo with his then-wife Linda Thompson, which produced six albums, including the critically acclaimed I Want to See the Bright Lights Tonight (1974) and Shoot Out the Lights (1982). After the dissolution of the duo, Thompson revived his solo career with the release of Hand of Kindness in 1983. He has released a total of eighteen solo studio albums. Three of his albums – Rumor and Sigh (1991), You? Me? Us? (1996), and Dream Attic (2010) – have been nominated for Grammy Awards, while Still (2015) was his first UK Top Ten album. He continues to write and record new material regularly and frequently performs live at venues throughout the world.