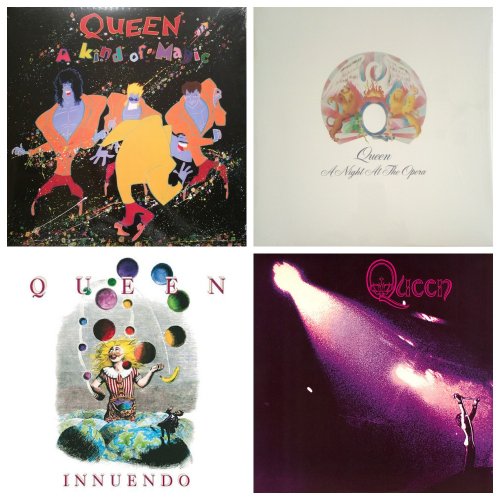 Queen is a British rock band formed in London in 1970 from a previously disbanded Smile (6). Originally called Smile, in 1970 singer Freddie Mercury came up with the new name for the band. (John Deacon joined in March 1971, giving them their fourth and final bass player).

The band has released a total of 18 number-one albums, 18 number-one singles and 10 number-one DVDs, and have sold over 300 million albums worldwide, making them one of the world’s best-selling music artists. They have been honoured with seven Ivor Novello awards and were inducted into the Rock and Roll Hall of Fame in 2001.

Lead singer Freddie Mercury died in November 1991 of AIDS-related complications. A year after his death, in April 20 1992 held a tribute concert for the lead singer to commemorate his life featuring all three remaining members and along with many great guest singers and guitarists.

Since the death of Freddie Mercury in 1991 Brian May and Roger Taylor continued as various “Queen+” incarnations. John Deacon has retired from the music business, and opted out of almost all post-Mercury Queen activities, saying ‘As far as we are concerned, this is it. There is no point carrying on. It is impossible to replace Freddie’.