Posted by Green on July 15, 2021
in progressive rock
as Pink Floyd 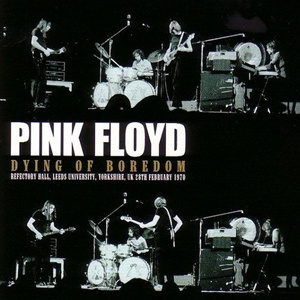 The Refectory Hall at Leeds University is, judging by the wealth of talented band who have played there, an important venue in northern England. Pink Floyd played there three times. The first time was on November 8th, 1969 and doesn’t have a tape source. The February 28th, 1970 show, which is featured on Dying Of Boredom, is complete and the final appearance in Leeds, which was on January 23rd, 1971, has a fragmentary tape with “A Saucerful Of Secrets” and the blues encore. A previous commercial release of this tape can be found on Leeds 1970 (Ayanami-243) but Sigma is the first silver release of this tape. It is very good and clear but a bit “flat” and lacking in dynamics. It contains all of the music played the taper paused between songs cutting off many of the song introductions. Despite these limitations it is still a very nice document from the first couple months of the new decade.

Disc 1: The Embryo, Careful With That Axe Eugene, Set The Controls For The Heart Of The Sun