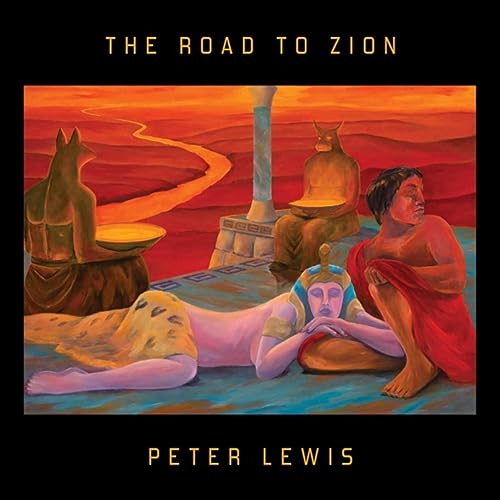 Early in his long and winding odyssey, Peter Lewis played a crucial part in the creation of that rare beast, the perfect rock & roll album: Moby Grape, a legendary union of guitars, voices and brotherhood made in a now-distant American age, the psychedelic San Francisco of 1967. Many miles later, Peter has made his best record as a singer, songwriter and spiritual explorer: The Road to Zion, new stories of wanderlust, fortune, trial and committment that still carry the living glow and redemptive power of that great band. The first steps here – the title song’s haze of dreamy guitars and gentle vocal assurance – sound as if Peter has just returned from the original trip. But like his best songs for the Grape – “Sitting by the Window” on that first LP; “He” on 1968’s Wow; the gorgeous Moby Grape ’69 miniature “What’s to Choose” – the day-glo-country twang of “Down by the Water” and the jangling march “In This Place” come with a kick inside: the cycle of sorrow and lessons that, in time, lead to light. The circular haunting in “Nobody’s Love” is the past in a bracing, present tense – Peter wrote it with Grape-guitar brother Jerry Miller – while the taut explosion of 12-string soloing in “Journey to the Crossroads” brings Peter’s guitar gifts to the fore. Count the years on the way to The Road to Zion, and you find an astonishing statistic: It is only Peter’s third solo album. But he never lost the path or mission. “I know we’ll meet again, this you can rely on,” Peter promises in “The Road to Zion.” Relish the searching and ringing guitars here, until the next time.