Posted by Green on February 9, 2020
in folk
as Paul Simon 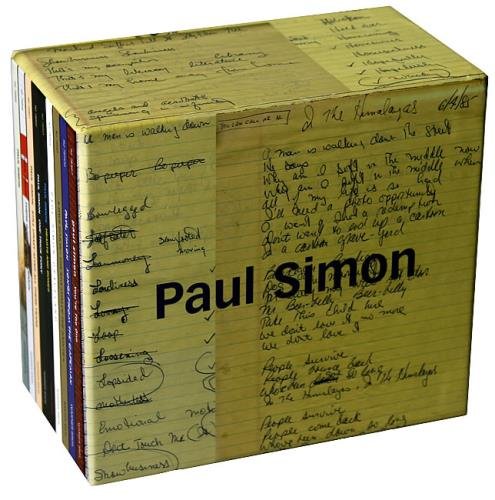 Look closely at the title to this nine-disc box set — it’s Studio Recordings, not the complete studio recordings, which means there are things missing, and they will be things that you will miss. Naturally, the emphasis on studio recordings means that neither of Paul Simon’s two live albums — 1974’s Live Rhymin’ or 1991’s Concert in the Park — are here, but this also doesn’t contain all of Simon’s released studio recordings, somehow bypassing “Slip Slidin’ Away,” the Top Five single originally released as one of two new songs on his 1977 compilation, Greatest Hits, Etc. Since that single was not on a proper album, it has been overlooked on this box, which serves up remastered and expanded digipack reissues of Simon’s nine solo albums from 1972’s Paul Simon to 2000’s You’re the One. Since these reissues not only sound terrific — the clarity, particularly on the first two albums, is startling — but are graced with genuinely interesting bonus tracks, the omission of the original version of “Slip Slidin’ Away” is a little easier to forgive, particularly since an excellent, loose-limbed alternate version is added to Still Crazy After All These Years and “Stranded in a Limousine,” the other new song on Greatest Hits, Etc., finally reappears on CD as a bonus track on One Trick Pony. These are only two bonus tracks of 30 that are spread over these nine albums. With the exception of “Stranded in a Limousine,” “Thelma” on Rhythm of the Saints (an outtake originally released as part of 1993 box set 1964-1993), and three live tracks on You’re the One, all of these bonus tracks are previously unreleased. While there is a handful of rare songs, the majority of these are either demos or works in progress, and they’re fascinating, such as a radically different version of “Duncan” with an entirely different narrative, different final verses on “Me and Julio Down by the Schoolyard” and “Loves Me Like a Rock,” and a skeletal working version of “Diamonds on the Soles of Her Shoes” containing little more than Simon’s vocal and a fretless bass. By and large, these are significant additions to Simon’s catalog, and combined with the terrific remastering, they make this essential for any serious Simon fan (although it would have been nice if either the individual albums or the overall box were given new liner notes, particularly since Rhino’s similar Jerry Garcia box set, All Good Things, had such a stellar booklet). For the less dedicated, a better bet will be cherry-picking from reissues of the individual albums, which are scheduled to go on sale in the month after the release of this box set.

Still Crazy After All These Years – 1975