Posted by Green on August 5, 2019
in pop, psychedelic, rock
as Paul Revere & The Raiders 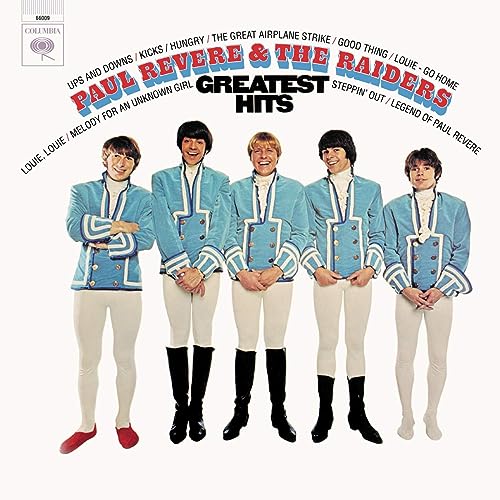 Paul Revere and the Raiders scored seven chart hits between the fall of 1965 and the winter of 1967, and all of them “Steppin’ Out,” “Just Like Me,” “Kicks,” “Hungry,” “The Great Airplane Strike,” “Good Thing,” and “Ups and Downs” were included among the 11 tracks on the group’s first hits collection. Also included were “Louie, Louie,” the Raiders’ first Columbia single, and its follow-up, “Louie, Go Home,” a B-side instrumental, plus the newly penned “Legend of Paul Revere,” which told the band’s story. Thus, the album traced the band from its beginnings as a Northwest club band to its reign as an L.A. pop/rock success. There would be more hits, but this brief compilation (it originally ran under 30 minutes) contained the essence of the Raiders’ most successful period and indeed marked the end of the band’s lineup, as the rhythm section split to form another group, leaving Revere and lead singer Mark Lindsay to recruit a new edition of the Raiders.