Posted by Green on November 8, 2020
in rock
as Neil Young & Crazy Horse 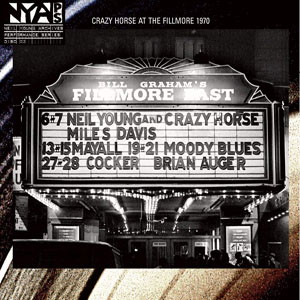 For years, fans of Neil Young and Crazy Horse have been waiting for an official chance to hear Crazy Horse live with original leader Danny Whitten, the insanely talented guitarist who died of a heroin overdose in late 1972, inspiring Tonight’s the Night. Tuned-in fans have been awaiting this very set for at least a dozen years, as it was originally to be tacked onto the end of a Decade-style triple CD of outtakes. Thankfully, this well-recorded live set from the infamous Fillmore East was well worth the wait. Here are scorching, extended takes of “Down by the River,” “Winterlong,” and “Cowgirl in the Sand,” each propelled by guitar interplay so delightful you have to keep rewinding to hear it again. In fact, bits of it seem to prefigure the ways that Richard Lloyd and Tom Verlaine would feed off each other in the band Television, only with less of a sweet edge. But the world doesn’t need any more arguments that Young was a proto-punk; what the world does need is at least a dozen more releases from Neil’s archives! And hopefully, with this awesome live album, the floodgates have truly been opened and there are many more to come, in the vein of Dylan’s Bootleg series. This disc is worth it alone for the version of “Wondering,” a tune not officially recorded until many years later in Neil’s weird ’80s rockabilly phase. –Mike McGonigal