Posted by Green on October 4, 2018
in folk
as Nathan Bowles 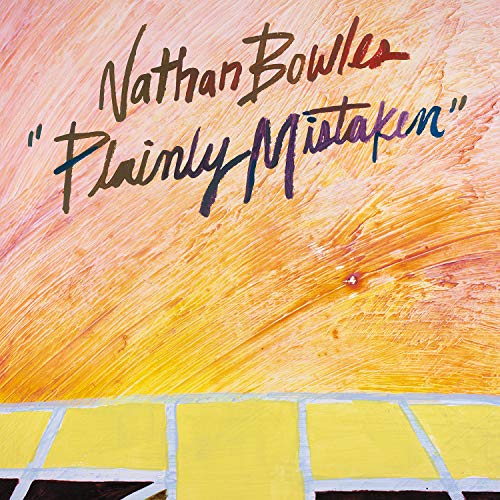 On his playfully sub versive fourth solo album, Nathan Bowles (Steve Gunn, Pelt, Black Twig Pickers) extends his acclaimed banjo and percussion practice into the full-band realm for the first time, showcasing both delicate solo meditations and smoldering, swinging ensemble explorations featuring Casey Toll (Jake Xerxes Fussell, Mt. Moriah) on double bass and Rex McMurry (CAVE) on drums. As he considers the cycles of deceit and self-deception that shape both our personal and political lives, a mixed mood of melancholy and merriment permeates Bowles’s own compositions as well as the interpretive material, which draws from traditional Appalachian repertoires and the diverse songbooks of Julie Tippetts, Cousin Emmy, and Silver Apples. Plainly Mistaken, the playfully subversive fourth solo album by Durham, North Carolina multi-instrumentalist Nathan Bowles, begins with a lullaby written by a child for an adult. The seven year-old Jessica Constable composed Now If You Remember the titular lyric continues, precociously, ‘we were talking about God and you’ for English singer Julie Tippetts’s 1976 album Sunset Glow. Bowles’s ethereal rendering represents a rather radical departure from his previous recordings; his placidly plaintive singing has been stripped of its otherwise genial, ursine gruffness, and the brief song floats by on the sedative ebb tide of banjo and pianos both acoustic and electric. A mixed mood of melancholy and merriment permeates Bowles’s own compositions as well as the interpretive material. His rambunctious and exuberant version of Cousin Emmy and Her Kinfolk’s 1946 proto-bluegrass classic Ruby, the other vocal track here elided with In Kind I draws primarily from the 1968 version by Silver Apples instead of the canonical versions by the Osborne Brothers or Buck Owens, thereby embodying a tribute to a palimpsest of bluegrass-meets-avant-garde iterations that perfectly suits Nathan’s own practice. In its trio-fueled headlong canter, Ruby feels unhinged and manic, a sinister interrogative mantra that encapsulates the slippery cycle of deception and stuttering accusation that plagues our contemporary cultural moment.