Posted by Green on March 6, 2021
in celtic, Discography, folk
as Murphy's Pigs 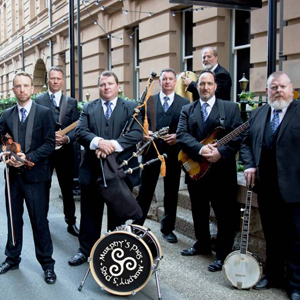 A BIG BAND, a big sound and nearly an acre of suit fabric. This is the award-winning, Celtic-Rock ensemble that the Department of Foreign Affairs & Trade is warning everyone about.

Throw caution to the wind and embark on a musical journey* through the lands of the Celts, as Murphy’s Pigs drag you headfirst into their world of rugged mountains, stormy oceans, fearsome battles, unrequited love and a dram or two of the whisky.

Murphy’s Pigs has graced some big stages including the world’s largest Celtic Festival “Festival Interceltique de Lorient” in France (twice), the Tamworth Country Music Festival, Woodford Folk Festival, the Gympie Music Muster, Winton’s Way Out West Fest, Australian Celtic Festival and many other festivals, cultural and corporate events. They have performed to culture junkies at the Queensland Performing Arts Complex, as guests of the Queensland Pops Orchestra, roared in front of thousands of screaming, sports-crazy fans at Metricon Stadium, and have twice been awarded ‘Artist of the Year’ at the Australian Celtic Music Awards. The band has recorded seven CDs and a concert DVD, and their music is enjoyed on national, local, and community radio stations around Australia, and in France, Germany, Canada, and the United States of America.