Posted by Green on April 5, 2020
in blues, soul
as Mavis Staples 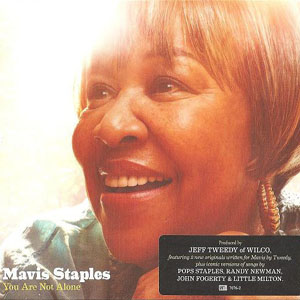 Mavis Staples has a mighty voice. Even into her 70s, she still has dynamic range that goes from a full-throated shout to an intimate whisper without losing her easy authority over a song. Over the decades, many musicians and producers have tried to wrangle that voice onto record, with varying degrees of success. With her father, Pops Staples, she recorded a string of songs that combined gospel and folk music, many of which– “Respect Yourself” and the sublime “(If You’re Ready) Come Go with Me”– became hits that soundtracked the tumultuous civil rights movement. In the 1970s and 80s, she worked with Curtis Mayfield, Steve Cropper, and Prince, even signing to his Purpleness’ Paisley Park label for a brief period.

In the 2000s, Staples has entered an unlikely third stage in her career, with a string of inspired albums that exhibit new range. We’ll Never Turn Back, recorded with producer Ry Cooder, revived civil rights anthems for the dying days of the Bush era, and they still sound prescient and powerful. Following the fierce Live: Hope at the Hideout in 2008, her latest album, You Are Not Alone, was recorded with Wilco frontman and fellow Chicago resident Jeff Tweedy. Tweedy clearly has a deep knowledge of and appreciation for Staples’ career, and he gives her a warmly textured backdrop that’s both familiar and inventive, with nods to past glories. He cherrypicks a number of her old hits to revive and chooses some new covers for her to sing, with a keen understanding of her strengths and weaknesses. In turn, Staples gives him intuitive and moving performances on each song, whether she’s celebrating her own salvation or bemoaning a lost love.

On “Downward Road”, a Pops favorite that the Staples Singers recorded decades ago, she’s casually scolding as she relates the story of a woman who revels in sin and pays a hefty price. A fat bass thwacks along, creating a strange gospel plod that makes Staples sound like she’s marching against the downward tide. By contrast, “In Christ There Is No East or West” is so delicate that it threatens to blow away with the breeze. It’s a risky tack, as Staples could very easily have bulldozed such light accompaniment, but she adjusts her delivery to convey her awe in God’s unfathomable omnipresence. This, she seems to say, is something to celebrate, and “I Belong to the Band – Hallelujah” and “Creep Along Moses” sound like party gospel– jubilant cries heavenward.