Posted by Green on November 24, 2020
in americana
as Matt Owens 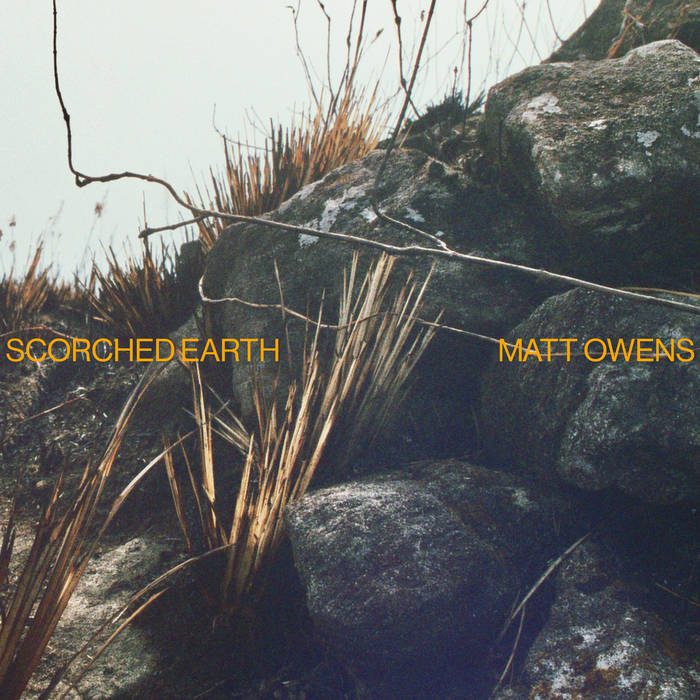 ake a large portion of Willie Nile, add a soupçon of Neil Young, a dash of Tom Petty and a pinch of The Pogues. Then stir in some folk, a little rock, a mournful harmonica, Celtic fiddle a funky guitar solo or two and an ethereal female voice, some double-tracking and reverb, stir vigorously and add a little seasoning to taste. That should be the recipe for a great album but in the case of Matt Owens’ second solo record ‘Scorched Earth’, the sum isn’t greater than the parts and to beat (pun intended) the analogy to death, it doesn’t really rise and falls a little bit flat.

Owens came to prominence as the bass player in the folk-rock band Noah & The Whale and ‘Scorched Earth’ is his second solo album following on from last year’s ‘Whiskey And Orchids’. It’s very different to that and as Owens says “I began chasing new instruments and sounds that I’d very much mistrusted in the past to see if I could find a use for them. In doing so bass organ pedals, synthesisers, crazy stompboxes, synthetic drums and even turntables ended up on the album and now I’ve fallen in love with them”. ‘Scorched Earth’ does away with its predecessor’s more acoustic sound in exchange for a much more rocky, dynamic feel to the twelve tracks.

Recorded at Manchester’s Airtight Studios as well as Mizpah Studio in Bath, Owens dispenses with the services of producer Nigel Stonier who worked on ‘Whiskey And Orchids’ and for his sophomore album, takes over the production reins himself as well as playing a number of instruments, aided and abetted by the likes of Elles Bailey and Robert Vincent who are somewhere on the album.

As well as the Willie Niles flavoured tracks such as ‘I Will Be There’, ‘Scorched Earth’ and ‘When The Stars Align’, a standout track is Owen’s homage to The Pogues and Kirsty MacColl’s ‘Fairy Tale Of New York’ on ‘Hungover In New York’, a stirring tale of a lesbian bar, Mexican border towns and Dylan Thomas. The other standout track is the closer ‘Last Day At The Festival’ with its folky Dylanesque acoustic guitar, Neil Young-like harmonica (which also features on the album’s opener ‘Cargo For The Road’) and its story of a girl high on drugs as she comes down from the euphoria of the festival and pines for her missing lover.

To return to the food analogy, ‘Scorched Earth’ may tickle the taste buds but when the whole is considered, it just doesn’t quite satisfy the hunger for a complete fulfilling musical dish.