Posted by Green on September 20, 2019
in country
as Marty Stuart 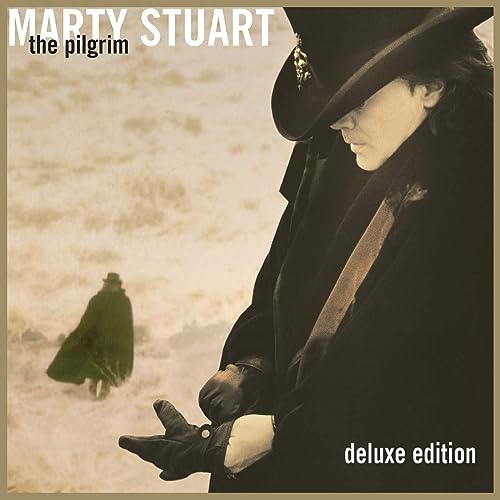 While the “concept” album has always been a staple of rock music, it’s rarely been a factor in country–until now. With THE PILGRIM, writer/singer/producer guitarist Marty Stuart has crafted an honest-to-goodness country opera complete with a cast of country legends portraying the various roles. THE PILGRIM is based, Stuart says, on a true story of a love triangle replete with marital infidelity, searching and redemption. Stuart himself plays the role of the lover, the “pilgrim” of the title, as well as a few other characters.

Along for the journey are Emmylou Harris, George Jones and Pam Tillis. Several tracks stand out, including the twangin’ “Sometimes the Pleasure’s Worth the Pain” and the beautiful “The Greatest Love Of All Time.” Stuart links the songs with instrumental passages, various reprises of the title track, and even a poetry reading featuring the unmistakable voice of his old boss, Johnny Cash. While THE PILGRIM is no one’s idea of a commercial country album, one has to admire the sheer ambition of the project, as well as the guts it took MCA records to release what amounts to a unique and deeply personal artistic vision.