Posted by Green on January 23, 2019
in krautrock, psychedelic
as Mandrake Paddle Steamer 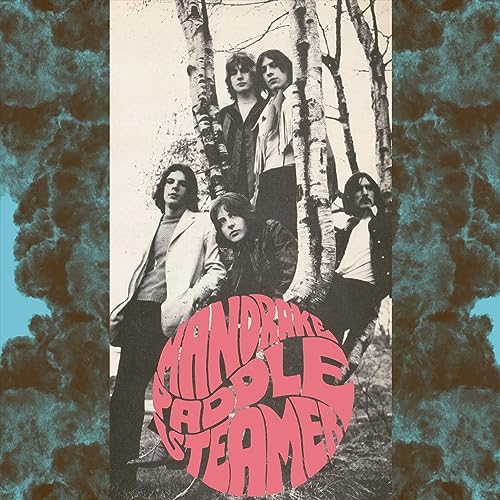 Previously unreleased recordings, 1968/1970, by British quintessential psychedelic / progressive band MANDRAKE PADDLE STEAMER / MANDRAKE, culled from the band’s archive of reel tapes and acetates. Pure late 60s UK psychedelic sound with early prog moves, plenty of Hammond and fuzzed out guitar, powerful vocals… Including such lost gems as the Barrett-Floyd sounding “The World Whistles By”, killer psych-rockers like “Pandemonium Shadow Show” or “Doris The Piper”, the mellotron fuelled “October Country” and more! Unlike other 60s British bands who changed their music to ‘psychedelic’ or ‘progressive’ with the time, MPS were born “progressive” from day one. Formed in 1967 in Walthamstow (London) by a core of art school students, their members were Brian Engel, Martin Briley, Paula Riordan, Martin Hooker and Barry Nightingale (later replaced by David Potts). During their short lifespan (1967-1970), MPS supported big names like Pink Floyd, The Nice or Vanilla Fudge. They played at the Isle Of Wight Festival, had a residence at the Star Club in Germany and ran their own club night (Asgard). Signed to the Parlophone label (though the band was aiming to be part of the more progressive Harvest imprint) they released in 1969 the “Strange Walking Man” 45, recorded at Abbey Road and now widely considered a lost British psychedelic classic (check Rubbles, Perfumed Garden, etc). Due to lack of promotion and interest from their record label, the 45 went nowhere. After some line-up changes and shortening their name to just Mandrake, the band definitively split in 1970. “Pandemonium Shadow Show” collects studio recordings registered by Mandrake Paddle Steamer / Mandrake during 1968/1970 at various London studios such as Regent, Orange and other unknown locations. Some of these tracks had been previously included on several bootleg albums with inferior sound quality / wrong titles and others have remained unreleased until now.