Posted by Green on February 18, 2021
in blues, roots rock
as Maggie Bell 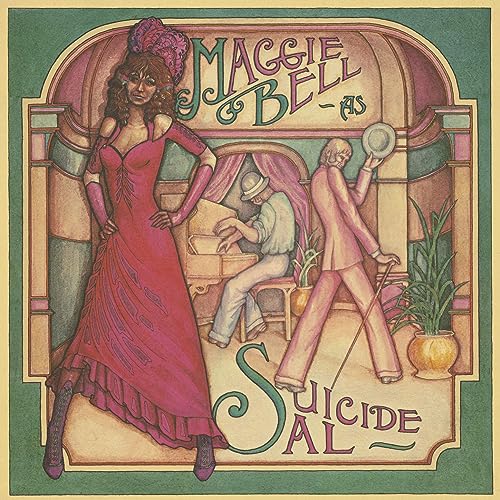 The success of Angel Air’s series of Maggie Bell reissues can be easily judged by the Scottish singer’s return to the U.K. after residing for years abroad, a planned autobiography, and her intention of touring. Although critically feted in the U.K., Bell, both solo and with her former band Stone the Crows, never quite achieved the commercial breakthrough everyone had so expected. Always a bridesmaid, never a bride, Bell’s recording career was punctuated by a sole Stone the Crows charting album. With that band’s demise in 1973, the soul singer went solo, releasing the (again) critically acclaimed Queen of the Night album, with 1975’s Suicide Sal following. A tougher, more energized set than its predecessor, Sal’s electrifying live feel reflects the incendiary stage shows Bell and her new backing band had been playing in the intervening time between recordings. The two bonus tracks, recorded at a gig later that year, capture their live ferocity. Intriguingly, the funky, fiery title track, an homage to Bell’s Aunt, a music hall star, is one of only two originals on this set. The second, the lavishly bluesy “If You Don’t Know” was penned by band keyboardist Pete Wingfield, and boasts a guesting Jimmy Page on guitar. The storming “Coming on Strong” also has a Bell connection, being co-penned by ex-Crow Colin Allen and Zoot Money. The rest of the album comprises astutely chosen covers drawn from an eclectic selection of artists. One of the standouts is “It’s Been So Long,” a powerful gospel number written by the Pretty Things’ Phil May, who not only rewrote some of the lyrics for Bell, but added his backing vocals to the song. Free’s classic “Wishing Well” gets a sensational workout, while that band’s offshoot Kossoff, Kirke, Tetsu & Rabbit’s “Hold On” is taken to new emotive heights. From barrelling Beatles pop to the Sutherland Brothers poignant Gaelic ode, from ballads to hefty rock & roll, Bell struts across this set with style and such assurance, that even Aunt Sal must have been impressed. One of Britain’s greatest soul singers, showcased at her best, this magnificent album also includes an excellent, expansive biography of this crucial artist.