Posted by Green on October 8, 2019
in folk
as Luke Tuchscherer 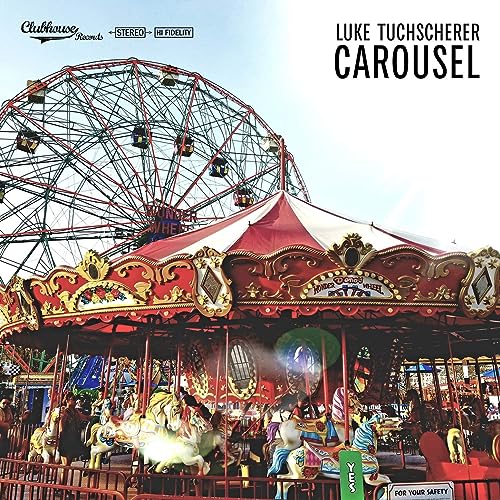 Although Dylan, Springsteen – as well as Neil Young and Townes Van Zandt – are cited as influences on this album, don’t be fooled into thinking that ‘Carousel’ is some cheap knock off clone of those greats. It absolutely stands on its own merits and the storytelling is first class. ‘Violets’ is a great example as Tuchscherer tells the tale of a woman, who judging by the bruises, seems to have been the subject of domestic abuse but he can only stand and watch helplessly and guess at what she has gone through and will likely go through in the future.

The oldest song on ‘Carousel’ is the opening track ‘My Darling England’ which was recorded when Tuchscherer was a member of The Whybyrds but which never made it to the final cut of the ‘Cold Blue Sky’ album. As luck would have it though, the lyrics are just as pertinent today as we endure the complete and utter Brexit shambles brought on by our inept politicians.

Tuchscherer himself sums up best the raison d’etre of ‘Carousel’. “First and foremost it was about finding songs that could stand up on their own. It would get a bit repetitive if I was just strumming open chords, so I wanted to pick songs that had a bit of interest in the guitar playing by employing different tunings and strange chord voicings. And on top of that, I wanted it to fit a theme lyrically too”.

‘Carousel’ is an album of simple beauty, an album that hits you with the immediacy of the playing and clarity of the vocals. Sit back, turn the lights down, pour yourself a drink and just immerse yourself in this delightful piece of music.