Posted by Green on January 13, 2019
in country fusion
as Lindi Ortega 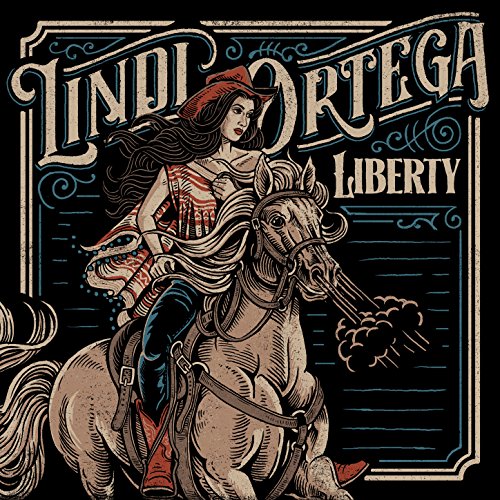 The first indication that this album takes a different approach to Lindi Ortega’s existing work is the credits; they read like a movie presentation. Liberty “stars” Ortega “with” Steelism, “featuring” players from veteran Charlie McCoy to Skylar Wilson and “introducing” the Liberty Choir. Push play and you even get a 90-second introductory instrumental with music clearly influenced by Ennio Morricone, taking us directly into the Western scenario that serves as the backdrop for these songs.

Ortega’s fifth effort is divided into three parts (“Into The Dust Parts l, ll, and lll”) and yes it’s a concept set, something she’s proud to declare. But don’t let the somewhat pretentious connotations of “concept” deter you — hey, Willie Nelson’s Red Headed Stranger also slotted into that description — as these dozen selections and a handful of shorter connecting instrumental passages unfold with filmic intent.

Ortega could hardly have found better musicians to realize her vision. She’s primarily backed by Steelism’s Spencer Cullum Jr. on pedal steel and guitarist Jeremy Fetzer, a Nashville-based duo whose own predominantly instrumental work gravitates to a widescreen style. Musically, this leans to a windswept, dusty, Spaghetti Western vibe, weighty on an atmosphere that reflects Ortega’s fondness for Quentin Tarantino flicks. It’s heavy on ballads but with just enough dark, reverbed twang and occasional trumpet and Latin strumming to keep things from getting stuck in a Mexican B movie rut.

Lyrically, it helps to have Ortega’s track-by-track notes to understand and follow the story. Even with them, the concept is a bit fuzzy but there is death, desperation, séances, resurrection, and a transition from dark to light of a nameless protagonist, portions of whose philosophical journey seem to reflect that of the recently married Ortega. Thankfully, the singer-songwriter’s lovely, trilling voice and bold creative outlook allows the music to work without having to refer to, or even understand, the larger overall saga. Still, some tunes like the Tex-Mex title track, the rocking resurrection of “The Comeback Kid” and the ominous heartbeat-driven “You Ain’t Foolin’ Me” stand out amidst the predominantly ballad oriented fare.

It’s a compelling, often hypnotic listen and a huge leap forward for Ortega whose previous Americana work, as impressive as it was, just didn’t have the scope or imagination found in Liberty. Whether you absorb it in bite-size pieces or jump into the 51-minute deep end of the pool while reading the lyrics, this superb and challenging album can be appreciated and enjoyed on a variety of levels.