Posted by Green on February 28, 2020
in country, folk
as Kris Kristofferson & The Borderlords 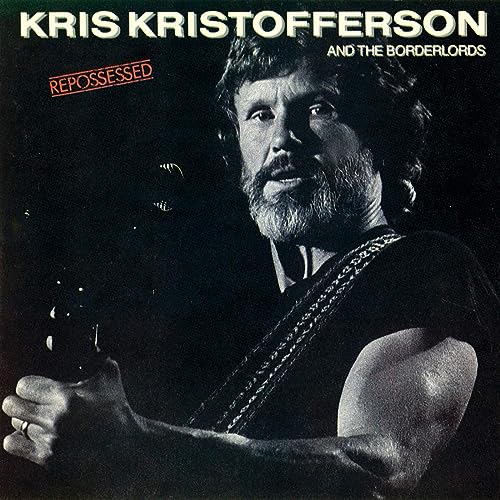 After Kris Kristofferson’s ninth and tenth solo albums, Shake Hands With the Devil (1979) and To the Bone (1980), missed the charts, he did not make another album on his own for more than six years, in the meantime contributing to three albums recorded with others: Kris, Willie, Dolly & Brenda … The Winning Hand (1982) (with Willie Nelson, Dolly Parton, and Brenda Lee); the soundtrack Music From Songwriter (1984) (with Nelson), which contained four Kristofferson solo tracks; and Highwayman (with Nelson, Johnny Cash, and Waylon Jennings). The last was a major success, topping the country charts, and probably interested Mercury Records in giving Kristofferson a new contract as a solo artist. The result was his 11th solo album, Repossessed, its title containing a telling double meaning. Kristofferson billed his backup group, the Borderlords, on the cover, a reasonable decision since they included such notable figures as Donnie Fritts and Billy Swan, who occasionally stepped in to sing a verse of a song here and there in place of the leader. Also, the tracks had a true country-rock band feel, and Kristofferson sometimes introduced the songs or called out solos as if they were playing a set in a club. The tracks thus had a kinetic feel, and that was all to the good since the songs themselves were not very impressive. 1986-1987 was a period of political unrest, as left-wing activists feared another Vietnam in El Salvador, and Kristofferson explored that concern in “What About Me,” while such songs as “Shipwrecked in the Eighties,” “They Killed Him,” and “Anthem ’84” reflected on various aspects of politics and war. But there were no real insights to be found in the songwriter’s sketchy and abstract descriptions, either in these songs or the more philosophical statements such as “The Heart” (chorus: “The heart is all that matters in the end”) and “Love Is the Way.” In a lull in his film career, Kristofferson promoted Repossessed with extensive touring and managed to keep it in the country album charts six months, with “They Killed Him” (which Bob Dylan had thought enough of to cover) getting into the lower reaches of the singles charts. But it was not one of his better records.