Posted by Green on July 10, 2019
in progressive rock
as King Crimson 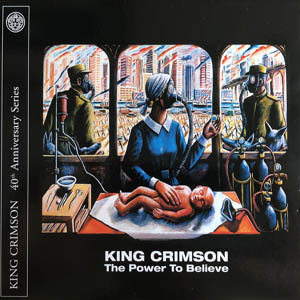 The Power to Believe – is the fifteenth and final release in the acclaimed King Crimson 40th anniversary series. CD features an enhanced, expanded master of the album. DVD-a features the new master in hi-res stereo audio. DVD-a also features the album in lossless 5.1 Surround Sound as mixed by David Singleton. All new mixes were approved by the set’s Executive Producer Robert Fripp. The original album master is included in hi-res stereo As a bonus feature, the mini-album Happy With What You Have to be Happy With – which preceded the release of The Power to Believe is included. Presented as a 2 x digi-pack format in a slipcase with new sleeve notes by King Crimson biographer Sid Smith along with rare photos & archive material. Concludes the highly collectable King Crimson series.