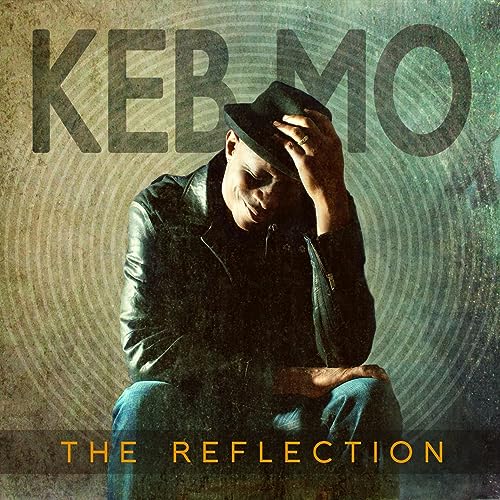 Being labeled and marketed as a blues musician was never really a good fit for Keb’ Mo’. True, he first came to the attention of most when he came out of Compton playing Robert Johnson songs on a National Steel guitar, and that’s how his recording career started, but this is a guy who used to be a staff songwriter for A&M Records, so he has always had plenty of pop, soul, R&B, and jazz in his kit bag and, truth be known, he’s really closer to an artist like James Taylor than he is to Howlin’ Wolf. His new album, The Reflection, the first on his own Yolabelle record imprint (he also self-produced the album) after several releases with Sony, has nothing on it that could be called blues, and nothing that even really comes close. It’s a calm, easy, and mellow mixture of adult pop, urban soul, and very light funk, but then Mo’ has been flirting with this kind of thing for a couple of albums now and it’s clear that this is closer to what he’s all about than being a blues preservationist — which he really never was in the first place. The sound on this release is crisp and warm, smooth as honey, and never jarring, as Mo’ muses on love and its difficulties in different settings, his vocals full of sincerity and good will. It’s all as pleasant as an easy summer afternoon, which is both a strength here and a problem. Nothing about The Reflection has an edge of any sort and as song after song rolls by, it gets lulling, and only a handful of the songs immediately stand out, most notably “We Don’t Need It,” a timely song about a man who loses his job and has to come home and tell his family, and “Crush on You,” which features guest vocals from India.Arie and has a charmingly light and innocent groove to it. A version of the Eagles’ “One of These Nights,” which features alto sax from Dave Koz, also stands out, but not for the right reasons. Mo’ has turned the song, which was fueled by the feeling of desperate lust in the original Eagles version, into a gentle song of yearning, and while the lyrics and melody still work in a more relaxed setting, the song really doesn’t generate the edge it needs to truly resonate. Keb’ Mo’ never was Howlin’ Wolf, Robert Johnson, or Muddy Waters, but he isn’t quite James Taylor yet, either. The Reflection is a warm outing, and it’s easy to like the sound of it, but all smooth honey makes one hungry for something with a little bit more of a kick to it now and then.