Posted by Green on May 20, 2020
in americana
as Kashena Sampson 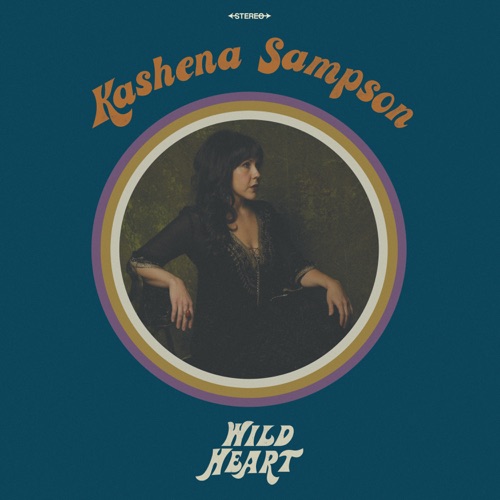 There was a time in the not so distant past when you could hear how much was spent on a record. But it’s almost impossible to make that sort of distinction today with production values available to those with the most meagre of budgets. And if anything, more acts nowadays are looking to reproduce a more rudimentary sound in a quest for authenticity. Such is the case with Kashena Sampson’s debut album. By best estimates an album some 14 years in the gestation, Kashena Sampson’s musical influences don’t extend much beyond the early 1980s, so the fact her folk and blues influenced Americana sound seems rooted in a 1970s sound is no surprise. It’s also no bad thing as ‘Wild Heart’ is a debut album of no small distinction.

Her back story is that before making the rather inevitable journey to Nashville, Kashena Sampson’s musical career was not dissimilar to that of the UK’s own Jane MacDonald, spending three years aboard a luxury cruise ship, singing nightly sets of Sixties and Seventies folk covers to otherwise no doubt disinterested passengers eating their supper.

Recorded live to tape, all the songs on this debut were tracked in two days, with overdubs, background vocals and mixing taking a further four days. This gives the album a satisfyingly raw and unpolished, but also warm feel – at once having a degree of familiarity while appearing like a new discovery at the same time.

Kashena Sampson has obviously lived something of a troubled existence before her move from LA to Nashville, the heartfelt nature of opening songs, ‘Away From Here,’ and ‘It’s A Long Way Back’ hinting at a drink and drug-fuelled past, essentially reflections on the journey she’s made up to this point and her embrace of a more sober present.

‘Greasy Spoon,’ meanwhile is a more humorous recounting of the time when she first made the move to music city and worked for three weeks in a greasy spoon cafe. It’s a jaunty, uptempo number, with feel good, Western swing, which makes it instantly accessible.

In terms of vocal sound, Kashena Sampson bears close comparison to Barbara Keith, and any similarities also extend to the album cover art used for ‘Wild Heart’ and that on Barbara Keith’s self-titled record for Reprise in 1972. It’s mirrored as well in the use of occasional vibrato and the vocal timbre on both records, most notably in Sampson’s case on the title track ‘Wild Heart.’ What they also share as expressive, soulful, country folk singers is an ability to fully inhabit their compositions.

It’s perhaps on the song ‘She Shines’ that Sampson really gets to demonstrate the full range of her vocal talents, a tune about standing strong in the face of rejection. Meanwhile, ‘Hold Me Close’ is an extremely affecting torch song about being ‘the other woman’ in an unhealthy love affair: “Hold me close / And tell me sweet lies / Say that you love me/ As the tears fall from my eyes,” Sampson guaranteed to be on the losing end in this particular ménage a trois: “Tell me all your intentions to be true / We both know you’re only passing through / On your way back to her.”

At the risk of making too many comparisons to other artists, this song brought to mind ‘I’ve Hurt Worse’ on Courtney Marie Andrews’ ‘May Your Kindness Remain,’ another song where the protagonist is trapped in a toxic relationship which the singer knows isn’t good for her, but still proves too hard to resist.

Kashena Sampson signs off with the elegiac ‘Come Back To Me,’ a haunting number about a former lover who died in a car crash while Sampson was at sea. Like so much of the rest of this album, there’s bravery in the autobiographical nature of this song, allied to a willingness to embrace her vulnerability and expose it for the world to see.

Drawing parallels to Courtney Marie Andrews is perhaps not an unfair one, because what both singers share is a rare facility as first-class storytellers with a deep emotional connection to their material. That’s because ‘Wild Heart’ is first and foremost an album of great storytelling, the songs on it running the full gamut of emotions from rejection and lost love through to gentle good humour, but ultimately leaving the impression of being a statement about personal redemption, a belief in hard work, persistence and self-belief. Highly recommended.