Posted by Green on November 13, 2020
in blues
as Josh Teskey & Ash Grunwald 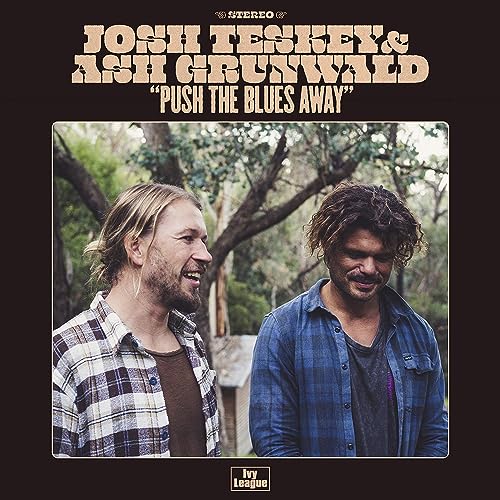 The formidable musical pairing of Josh Teskey and Ash Grunwald makes for an exciting release day today. In the past year, both artists have kept busy: Ash Grunwald released his critically acclaimed new album ‘MOJO’, along with his first book, “Surf By Day, Jam By Night”, while The Teskey Brothers followed up their ARIA Award-winning and Grammy nominated second album ‘Run Home Slow’ with the 2020 release of ‘Live At Forum’, which earned them their first ARIA chart #1.

Luxuriating in the simple pleasures of the classic blues sound, this album starts off with Low Down Dog, a tantalisingly soulful track. Feisty harmonica and an insistent, slow paced guitar riff accompany the whole song. Achingly raw vocals from Grunwald spell out a difficult relationship – “I ain’t gonna apologise / But I’m sorry just the same”. The burning intensity of the music continues right to the last line, Teskey and Grunwald joining to sing “I gave you my all / Though I never knew your name”, then finishing with scatting over scorching guitar.

Hungry Heart, penned by Teskey as a love letter and ‘Part Two’ to his song Push the Blues Away, is, as Teskey explains it, “the happy ending, the moment I stopped running away and found and accepted love”. It feels like a song you could sing with family around a campfire, capturing the warmth and comfort of finally coming to love. As Teskey takes the lead on vocals for this track, we get the chance to hear his lyrics shine as he sings, unpretentiously and sincerely, “Searching to feed this heart of mine / But it’s you I was searchin’ for”.