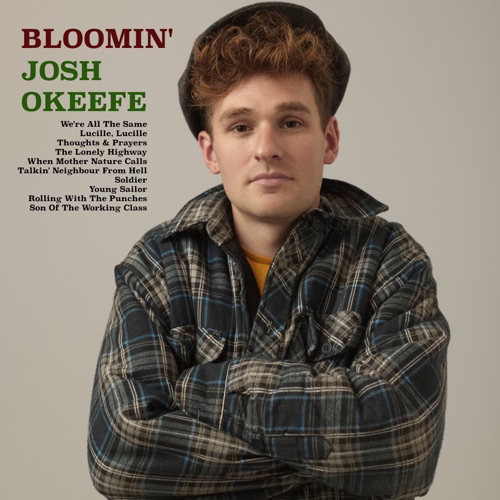 At some point during a review of Josh Okeefe’s music there’s going to be a reference to Woody Guthrie and Bob Dylan and for good reason. In addition to his voice and his delivery style, Okeefe’s music is, when needed, bitingly direct, complete with much of the anger and vitriol associated with those musical giants. There’s a rawness to his storytelling that is hugely compelling, all aided by a voice that reaches out and grabs you by the throat and insists that you listen and listen carefully and, as with Messrs Dylan and Guthrie, young Mr Okeefe has a lot to say.

Born and raised in Derby and having dropped out of school at age 16, he lived briefly in London and Brighton, often sleeping on the floors of recording studios, coffee houses and the other small venues he frequented, before moving to the US and ending up in Nashville, the spiritual home of his heroes Hank Williams and Johnny Cash. As his reputation grew, particularly following his well-received 2017 EP ‘Josh Okeefe’, he earned much sought-after spots at major music events on both sides of the Atlantic, including the Woody Guthrie Folk Festival, the Black Deer Festival and at the invitation of Billy Bragg, he debuted at Glastonbury for the first time in the summer of 2019.

The album gets off to a great start with the excellent ’We’re all the Same’ which espouses a view of humanity being born equal, which is clearly fine in principle but never exists in the type of world in which we live today, before jumping into ‘Lucille, Lucille’, a heartfelt plea for the return of a lover that appears far from certain. The Dylan/Guthrie vibe resurfaces strongly with ‘Thoughts & Prayers’, a stinging rebuke for the sickeningly glib and empty remarks that so easily roll off the tongues of many US politicians following the seemingly endless mass shootings that afflict that country. This isn’t simply an anti-gun song and as Okeefe says “…this song is about the criminals who just sit there, do nothing and let these harrowing events happen time and time again to protect their own folly interests.”

Don’t be fooled into thinking that Okeefe is a one-trick pony protest singer, on ‘Talkin’ Neighbour From Hell’ he moves into a talking blues style where his language and accent (deliberately) moves from his native East Midlands to Ireland as well as resembling that of Ramblin’ Jack Elliot with whom he shares a similar back story (both having dropped out of school at a young age and left home to become wandering troubadours).

Despite the similarities and the more than passing comparisons with Guthrie and Dylan, Josh Okeefe is his own man. His lyrics are smart and incisive, and his voice is more than strong enough to convey his message with both precision and real passion. On first listen, you may think that he is a man who is born too late and that the days of this type of protest artist are in the past. He’s not, he’s been born at the exactly the right time and the world, more than ever, needs Josh Okeefe and more of his type of cutting social commentary.