Posted by Green on July 21, 2020
in rockabilly, space-rock
as Johnny Burnette 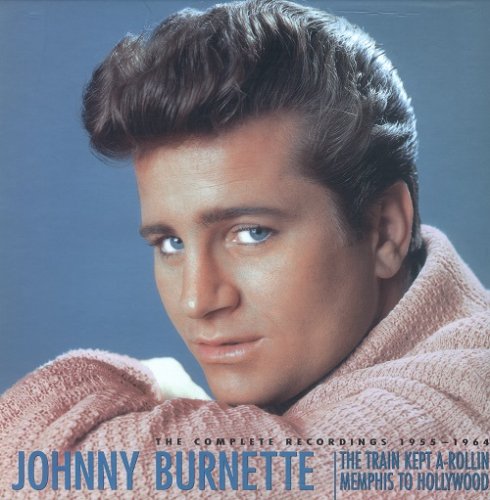 If ever there were an act that deserved more than it got, it was Johnny Burnette and the Rock ‘n’ Roll Trio. These three young men — Johnny and his brother Dorsey and guitarist extraordinaire Paul Burlison — were the authentic rockabilly article, hailing, like Elvis Presley, from Memphis proper. They were rawer than Jerry Lee Lewis and Elvis put together and at their best more exciting to listen to. And while Burnette went on to write hits for Ricky Nelson and score a few of his own, it’s the Rock ‘n’ Roll Trio sides — none of which ever charted — for which he is most remembered. The nine CDs here include the earliest Burnette material issued as the Rhythm Rangers in 1955 on the Von label from Corinth, MS, and sounds like the last gasp of the hillbilly boogie shack shaking music issued throughout the late ’40s and early ’50s. What happened to transition the Rhythm Rangers to become the Rock ‘n’ Roll Trio is unknown other than the overnight success of Elvis. The two bands contained exactly the same personnel (although an earlier Rhythm Rangers included Scotty Moore as well, Elvis’ famed guitarist). All of the Coral singles as well as outtakes are here, as are their Imperial sides by the Burnette Brothers, those obscure Dorsey solo singles on Cee-Jam and Surf, and Johnny’s solo sides on Freedom (such as “Gumbo” and “Me and the Bear”), Liberty, Vee-Jay, Chancellor, Reprise, Capitol, Sahara, and Magic Lamp. All 163 sides are featured here in great remastered sound and painstakingly annotated in the true obsessive Bear Family tradition. There is a hardback 166-page book loaded with photos and record sleeves from all over the world and a full detailed biography by Colin Escott that discusses not only the lives and travails of bandmembers but the recordings sessions as well. The story and sounds chart the evolution of the rockabilly sound into Johnny’s successes as a crooner and pop singer as well as a successful songwriter who was on his way to another breakthrough creatively when he was killed in a boating accident. While many may find the slicker pop material superfluous, it is exceptionally well-crafted and deserves a righteous hearing, not in spite of the rockabilly wildness that the Rock ‘n’ Roll Trio put down but because of it. This is one of the finest sets the Bear Family label has ever assembled; it is a labor of love to be sure, but it is also a work of art.