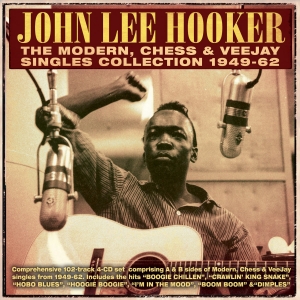 John Lee Hooker is one of the true giants of blues, ranking alongside the likes of other post-war greats such as B.B. King, Muddy Waters and Howlin’ Wolf as one of the artists who contributed massively to the development of the genre. His driving boogie style has become an essential element of the way blues is played in the modern era. He took the simple structures of Delta blues, sometimes using one and two-chord compositions, but added a fierce, relentless and hypnotically rhythmic approach, underlining the rawness of the messages in his songs. He was one of the blues artists who exerted a substantial influence on emerging stars in the rock ‘n’ roll era, from Bob Dylan through to Jimi Hendrix and Eric Clapton, and his legacy resonates through the rock music of the last half-century. He recorded prolifically under a number of names, but this great value 101-track 4-CD collection focuses on the singles he released under his own name (or in the case of some Chess singles, as John Lee Booker) on the Modern, Chess and VeeJay labels from 1949 through to 1962. It naturally includes his big R&B hits during that period – “Boogie Chillen”, “Crawlin’ King Snake”, “Hobo Blues”, “Hoogie Boogie”, “I’m In The Mood”, “Boom Boom” and “Dimples”, some of which have become blues and R&B standards. Includes comprehensive booklet with full discographical and session information. It’s a thorough overview of his output during what was perhaps the key era of his career, and a fine showcase for his unique talent.